See how this Guardian took flight all the way to his new ongoing series!

Even an inter-galactic rapscallion like Rocket Raccoon can find himself helping out an old friend now and again. Of course, it helps if she’s a lady and he may or may not still have feelings for her. That’s what sends the cosmos’ best tactician into heist mode in the pages of Al Ewing and Mike Mayhew’s ROCKET #1, which debuted this week.

In the spirit of aiding old friends, let’s help the guy stroll down memory lane by digging into his…eclectic first few years of existence.

Rocket debuted in 1977’s MARVEL PREVIEW #7 within a back-up story by Bill Mantlo and Keith Giffen. The issue starred Prince Wayfinder, a novice inter-galactic traveler whose mentor had perished. Needing supplies, his robotic helmsman landed them on a planet called Hailailae, otherwise known as Witch-World. While out hunting game, the prince stumbled upon the future star of stage and screen, though this version talked more like a blustery British gent and went by “Rocky.”

Interestingly enough, Rocket’s first appearance revolved around a moving tree he had a relationship with, though not Groot. He noted that the tree—which attacked Wayfinder over his water source—used to get fish for him. Anyway, Rocky offered to help the Prince find food on the planet, but also failed to warn him of an impending problem with the monstrous Plagueosaur before running into the witch Kirke.

The story didn’t continue and Rocket didn’t appear again until 1982’s INCREDIBLE HULK #271. This time Mantlo teamed with artist Sal Buscema and our hero looked much more “cartoony” and palled around with Wal Russ as Guardians of the Keystone Quadrant on Halfworld. He’d also lost the British brogue. Though the duo tried saving an unconscious Hulk from a giant lawn mower, ol’ Green Jeans woke up to the sound and did the job himself. Eventually, Hulk agreed to help them fight more talking animals and some super creepy killer clowns before moving on to save Betty Ross and Rick Jones on another planet. 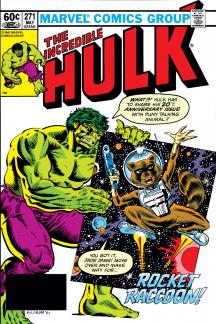 Aside from a few pop-ups here and there, Rocket would lie dormant until 1985 when Mantlo and artist Mike Mignola created the four-issue ROCKET RACCOON limited series. This tale dug even deeper into Rocket’s past on Halfworld. Skip ahead another 20 years or so and the furry little tactical genius would be holed up in a Kree prison along with other undesirables like Groot, Mantis, and Bug. There, a guy named Peter Quill would lead them on to great things beginning with ANNIHILATION CONQUEST – STAR-LORD by Keith Giffen and Timothy Green II!

For a character with only a handful of appearances in his first few decades in existence, Rocket sure has a lot of limited, solo, and ongoing series’ under his belt these days. He and Groot explored the furry one’s true Halfworld origins in the pages of  ANNIHILATORS. Skottie Young launched a fantastic series in 2014 that lasted 11 issues. Then, in 2016, Young brought the big wooden buddy along for the ROCKET RACCOON & GROOT series. In addition, earlier this year, during the “Grounded” story, writer Matthew Rosenberg and artist Jorge Coehlo created a five-issue series heaping even more reasons why Rocket disliked Earth so much.