Wade Wilson’s had his old pal Cable in his sites ever since Marvel entered the Legacy era and he seems to be having a great time with the idea in DESPICABLE DEADPOOL by Gerry Duggan and Scott Koblish. As seen in this week’s #291, Cable’s clone and enemy Stryfe’s also pretty high on the idea.

But who is Stryfe and where did he come from? For the very first look, we have to turn the time dial back to the nifty 90s — 1990 to be exact — when Louise Simonson and Rob Liefeld introduced the character in NEW MUTANTS #86, though we only got a glimpse of his arm and discovered that he lead the Mutant Liberation Front. 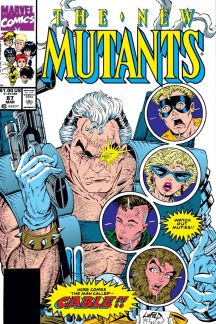 In the following issue, NEW MUTANTS #87, his hench-people — like Wildside, Reaper, Strobe, Forearm, Thumbellina and Tempo — smashed into a research facility. Cable, making his own debut, did the same not long after and got caught in a blast that knocked him out of commission, but only for a time.

Later in that issue, Stryfe fully revealed himself to us visually while talking over plans with Wildside. In that conversation, the underling implied that demanding mutants be freed acted as a ruse to distract the government, but Stryfe explained: “We care, Wildside, because they are symbols of the injustices visited on our kind. And so, as proof of our natural superiority, we will enter their secret complex, and take their prisoners from them.”

This mission wound up putting the MLF directly in the path of Cable who battled them. Between Cable’s own battles and the actual New Mutants team finishing up their trip to Asgard, Stryfe remained off-panel for a while before returning to the spotlight with NEW MUTANTS #93 and #94 when the Cable-lead New Mutants teamed up with Sunfire and Wolverine to take down a MLF operation intended to kill many people just to show the world Stryfe’s seriousness. 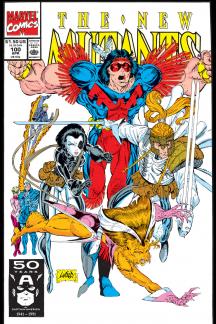 The biggest shocker came at the end of NEW MUTANTS #100 when Stryfe pulled off his helmet to reveal Cable’s cloned face underneath! For a full recap on how the Askani cloned a young Cable and Apocalypse had the child stolen, check out THE ADVENTURES OF CYCLOPS AND PHOENIX #4 by Scott Lobdell and Gene Ha!

Though he started out as more of Cable’s direct enemy, Stryfe upped his game when it came to the 90s X-over X-Cutioner’s Song. Running through X-FORCE as well as X-MEN, UNCANNY X-MEN and X-FACTOR, the epic kicked off when Stryfe posed as Cable and shot Professor X up with the Tecnho-organic virus. The series also included the likes of Apocalypse and Mr. Sinister also working towards their own nefarious ends, but also revealed more details about Stryfe’s strange history with Cyclops, Jean Grey and even Apocalypse. As you might expect from a multi-month crossover, this one featured all kinds of ins and outs, double crosses and major changes for the teams moving forward!