When it comes to super geniuses per capita, no place compares to the Marvel Universe! Some use their powers to help keep the world safe while others try to rule the world. And some just want to make crazy weapons to sell to nutcases! The Tinkerer – newly returned in this week’s PETER PARKER: THE SPECTACULAR SPIDER-MAN #4 – fit into that last category for most of his villainous career. 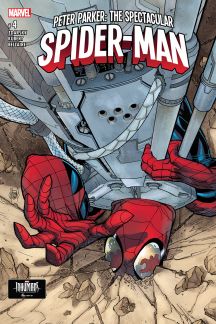 First debuting back in 1963’s THE AMAZING SPIDER-MAN #2 by Stan Lee and Steve Ditko, The Tinkerer made quite an impression on his first page. The old man with glasses propped up on his forehead wearing a plaid sweater and green slacks might have seemed like no problem at all had he not blasted Spidey with a ray gun right then and there! 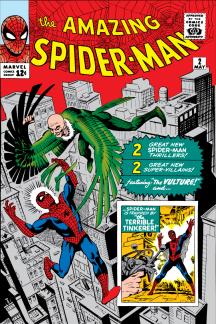 In the Mighty Marvel tradition of the day, the next page flashed back to Peter Parker working hard in the chemistry lab at Midtown High where his teacher introduced him to electronics expert Professor Cobbwell who needed some weekend help. Peter’s first duty included stopping to pick up a radio from The Tinkerer Repair Shop on the way over the next day.

After arriving at the business the next day, Peter’s Spidey Sense went off, but he chalked it up to electrical impulses from the nearby machines. However, we learned that he should have listened to it as the Tinkerer and his apparently alien cronies hid something sinister inside Cobbwell’s  radio!

While working in Cobbwell’s lab, Peter realized that his Spider Sense continued to react in the same way. When his new boss left to give a lecture, Peter inspected the radio and found something extra inside. To investigate, he ditched his civvies and swung his way back to the shop!

Having descended into the Tinkerer’s underground lab, our hero learned that the radios all now hide secret spy equipment so that he could learn about Earthly weaknesses and attack with his alien cohorts. After being discovered by one of the potential invaders, Spidey fought hard, but fell to the Tinkerer’s blast seen on that first page.

The Wall-Crawler used his own considerable intelligence and skill to get himself out of the Tinkerer’s death trap. In the ensuing battle, much of the equipment got destroyed and caught fire, engulfing the entire place in flames. Spider-Man tried saving The Tinkerer, but he refused to be touched and they both escaped through the smoke.

Much later on down the line, The Tinkerer returned in AMAZING SPIDER-MAN #159 and 160 where he designed a Spider-Mobile to kill the Wall Crawler himself! From there he went on to update and create weapons for many a masked marauder and even played a huge part in SECRET WARS. Now he’s back to cause more trouble for Spider-Man! 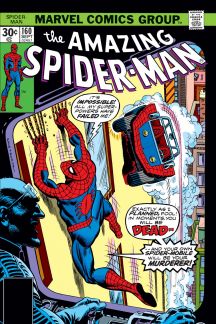 One of the most interesting parts of Tinkerer’s history remains the fact that, for the more-than-15-year gap between his first and second appearance, Spidey and the readers believed him an alien! Much of that came from Peter walking away from that first confrontation with a human mask, but also a bio published in AMAZING SPIDER-MAN ANNUAL #1 which clearly labeled the Tinkerer as “the first, and the only alien menace Spider-Man has ever fought!” He explained the mask in AMAZING SPIDER-MAN #160: “That mask I left you holding was merely a ruse – a simple ploy to deter pursuit that, I must say, worked exceptionally well!”

The aliens themselves reappeared in PETER PARKER: THE SPECTACULAR SPIDER-MAN #50 and 51, but the Wall Crawler learned that are and were out of work actors posing as aliens that Tinkerer hired. One of that actually turned out to be the future Mysterio who got the gang back together for the job seen in these issues.