She may be Wolverine now, but Laura started off as a scared kid!

It’s a good time to be Laura Kinney, but that hasn’t always been the case. She may be represented on the big screen in “Logan” and just kicked off a new arc with ALL-NEW WOLVERINE #19 by Tom Taylor and Leonard Kirk, but her earliest days were filled with pain and torment.

Read
What is Marvel Unlimited?
The character of X-23 actually debuted on the animated series “X-Men: Evolution” in 2003. The next year, the nearly-silent Wolverine clone made the jump to comics with an appearance in NYX #3 by Joe Quesada and Josh Middleton. In that issue, readers met a young woman who sold herself to men that liked to be cut by her retractable claws. The rest of that series didn’t get too much into her history, but did show that this girl had more in common with Wolverine than just the claws. She could also handle herself against seemingly formidable opponents.

“X-Men: Evolution” writers Craig Kyle and Chris Yost returned to the character with X-23 in 2005. The six issue limited series drawn by Billy Tan gave a full account of Laura’s creation. Way back when Wolverine escaped from the Weapon X program, a mysterious group gathered some of his DNA and wanted to recreate the experiment. The process stalled out until Dr. Sarah Kinney came along and suggested they create a female clone. The idea fell on deaf ears, so she went and did it anyway.

The result, X-23, trained from a very early age to fight ferociously, but underwent torture aimed to force the popping of her claws and development of a healing factor. Later, her claws were surgically removed, sharpened, and covered with Adamantium. Her handlers developed a “trigger scent” that would send her into a berserker rage in an instant. The organization then hired her out on various assassination missions which she easily carried out.

Dr. Kinney finally acknowledged the terrible things she’d done to this child when her niece had been kidnapped. The doc took X-23 out on a private mission to get the girl back. This set in motion events that would not only lead to X-23’s escape from the program, but also the destruction of future clones. 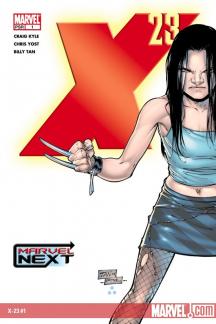 With her dying words, Dr. Kinney gave X-23 her real name: Laura. She finally met her “father” in the pages of X-23: TARGET X by Kyle, Yost, and Mike Choi. As you can imagine, the interaction came with plenty of rage and blood, but ultimately Wolverine suggested that Laura get involved with the X-Men.

That began a long run with various X-squads including the New X-Men, X-Force, and the All-New X-Men. These days, Laura can be found in ALL-NEW WOLVERINE, having taken up the mantle of her dad after he died. The current story finds her racing the clock to help stop a space virus from running rampant on Earth.

Up above we mentioned that X-23 first appeared on the “X-Men: Evolution” animated series. The show recast many of our favorite mutants as teenagers, but Wolverine acted as an older mutant and original member of the X-Men. To bring in similar elements from that character, but age them down for the audience, Kyle and Yost went the clone route and introduced Laura in “X23,” the 11th episode of the third season. She popped up again the fourth season in an episode called “Target X.” Since then, the character has also appeared in two other cartoons: “Wolverine and the X-Men” and “The Super Hero Squad Show.”