The Conqueror encounters Earth’s Mightiest Heroes for the first time!

Since the early days of Earth’s Mightiest Heroes, Kang the Conqueror has agitated the Avengers and then some with his mastery of multiple eras and desire to add the Marvel Universe to his empire. On November 14, the time tyrant takes on a new role as central antagonist in the “LEGO Marvel Super Heroes 2,” creating a campaign that crisscrosses all reality and space.

Before you play the game, discover the story behind this agent of chronological chaos with the History of Kang!

When one examines a being such as Kang, a master of time-travel among other incredible accomplishments, one must remember that what we perceive as a linear progression of history here in the present-day may actually not be so according to Kang himself. Slipping in and out of time along his personal chrono-line, he’s created false representations of his career to modern scholars and historians—in essence, simply because one may encounter the man at one time, doesn’t necessarily mean it’s not a Kang from an earlier time in his life.

After Nathaniel Richards abandoned the guise of Pharoah Rama-Tut and adopted that of Kang the Conqueror, he entered into direct conflict with the Avengers, and thus created an enmity with Earth’s Mightiest Heroes for all time.

His first sally against the present-day Avengers came during the earliest line-up of the team, but also one of their strongest. Iron Man, Thor, Captain America, Giant-Man, and The Wasp responded to a call from the Pentagon to investigate a UFO and instead met Kang in all his new-found glory. The despot explained his past persona as Rama-Tut and then proceeded to proclaim his reign over the planet. The Avengers, of course, defied him and battled until their unfortunate capture.

This first encounter ended when young Rick Jones and his so-called Teen Brigade created a diversion and freed the heroes from Kang’s holding cells, Giant-Man used a new acid-base solvent of his design to destroy much of the Conqueror’s personal equipment, and the despot escaped back to the future to lick his wounds. During the battle, the heroes found Kang to be arrogant, full of his own superiority, and disdainful of anything the present-day could offer next to his own 30th century technology. 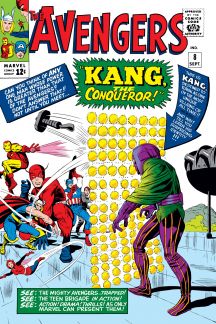 After he realized his mistake in confronting the Avengers directly, Kang later schemed against them by remaining in the future and sending a Spider-Man robot to first lure the group into a false sense of security, and then waylay them one by one. The Conqueror’s plan worked beautifully until the real web-slinger swung in to destroy his artificial doppelganger and help the Avengers turn the tide once more against Kang.

In this second encounter versus the famous team, Kang’s superiority manifested again, but when he realized he’d been defeated, he devolved into near-hysterics, proclaiming everything he’d done “was all in vain.”

Time passed and Captain America took the reins of a smaller team of Avengers consisting of himself, Hawkeye, Quicksilver, and The Scarlet Witch, sometimes referred to as “Cap’s Kooky Quartet.” Looking in on them from the future again, Kang reasoned the team’s then-current status made them ripe for his revenge and so transported them to his far-flung century. His mistake manifested in his revelation to the heroes that he’d fallen in love with a princess named Ravonna, and might err in his judgment in any dealings with her. Cap’s team helped the princess in a war between her kingdom and Kang’s immense forces, but in the end those same forces turned on the despot and he in turn allied himself with Ravonna’s people to save her.

This adventure highlighted Kang’s capability to love another human being, despite his high-minded and frankly wicked actions. Sadly, as the Avengers faded away to return to their own time, Ravonna, her eyes open to Kang’s good side, fell dead from an assassin’s cowardly strike. The Conqueror, having failed to conquer love, turned away to harden his heart for the next battle against Earth’s Mightiest Heroes.