Catch up with T’Challa’s adventures through to the modern day!

On Doctor Doom’s artificial Battleworld, The Black Panther organized the legions of the dead in SECRET WARS #7 to go with him to fight the god-king. They arrived together in the middle of the final battle between Doom and his opponents in SECRET WARS #8, and T’Challa used an Infinity Gauntlet to attempt to take the tyrant down. Having distracted the demigod, the Panther stood back while Reed Richards confronted Doom for the last time in SECRET WARS #9.

On the newly recreated Prime Earth, T’Challa joined with a band of heroes in ULTIMATES #1 to address larger cosmic concerns, such as the threat of the world-devourer Galactus and out-of-control time travel. After aiding the world’s champions versus a celestial destructor in CIVIL WAR II #1, the Panther learned of a new Inhuman named Ulysses who possessed the power of future-visions, and the death of Tony Stark’s dearest friend James Rhodes.

The Ultimates tried to stand between the Inhumans and Iron Man in CIVIL WAR II #2 when Tony’s rage over Rhodey’s death brought him to blows with the royal family. T’Challa aided in the tracking of Stark after he kidnapped Ulysses, but when confronting Iron Man, the young Inhuman revealed a terrifying new vision of The Hulk killing all the super heroes. Hawkeye assassinated Bruce Banner shortly thereafter, and the Panther watched the archer’s trial from Ultimates headquarters in CIVIL WAR II #3.

Tony Stark threw himself into identifying the exact nature of Ulysses’ power in CIVIL WAR II #4, while The Black Panther worked with Captain Marvel in arresting a suspect from one of the Inhuman’s visions. Stark confronted the Ultimates and Marvel with his theories, but tempers soared when he and the captain angrily disagreed on the matter. Ultimately, T’Challa stood alongside Captain Marvel, the Inhumans, and the Guardians of the Galaxy in CIVIL WAR II #5 to battle Iron Man, the Avengers, and the X-Men. 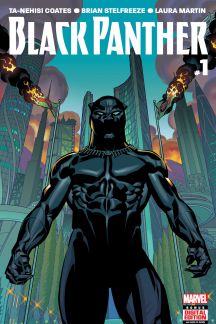 Back in Wakanda, unrest among the populace grew in BLACK PANTHER #1, and an anarchist named Tetu fomented insurrection. Furthermore, two of T’Challa’s loyal guard betrayed him and flew off to start their own resistance movement.

The Black Panther traveled to Wakanda’s border with Niganda in BLACK PANTHER #2 to confront Tetu’s associate Zenzi. There, he battled against her power to influence men’s minds, and withdrew when she amplified his guilt over his lost sister Shuri. In BLACK PANTHER #3, T’Challa faced off against Tetu himself, but the rebel leader escaped the monarch’s wrath.

In BLACK PANTHER #4, the Panther’s council announced the troubles as revolution, and after he consulted his mother Ramonda on what to do, a terrorist bombing raid on the capital city nearly killed the woman. Angered, T’Challa called in help from former Avenger Manifold in BLACK PANTHER #5, as well as sought advice from a collection of wily members of the world’s various intelligence leaders. Tetu enlisted Zeke Stane to help him in BLACK PANTHER #6, and together with the Fenris Twins, the villain captured the Panther during a raid on Tetu’s base. In BLACK PANTHER #7, T’Challa’s friends the Crew rescued him and helped him break through his enemy’s troops.

Continue to follow T’Challa in the pages of his ongoing series, BLACK PANTHER, available monthly!