The Jade Giant reunites with the Defenders, puzzles over a bizarre island, and more!

When Nightmare, Dormammu, and Umar all raised their heads to create new trouble, Doctor Strange urged his old comrades to join together once more in DEFENDERS #1. After squaring off against Namor, The Hulk battled the terrifying Mindless Ones in DEFENDERS #2, and found himself the object of Umar’s amorous attentions in DEFENDERS #3. Finally, he and his fellow non-teammates faced down Dormammu himself in DEFENDERS #4. 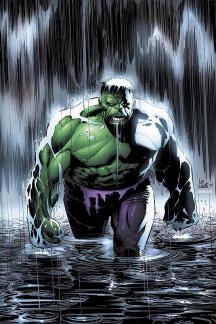