As Miguel O'Hara swings into 'Amazing Spider-Man,' read up on his groundbreaking legacy!

For a guy from the future, Miguel O'Hara sure spends a lot of time in the present! And he's returning once again, now in the pages of AMAZING SPIDER-MAN #33!

But before that happens, let's take a look back...

The hero otherwise known as Spider-Man 2099 first met his modern day counterpart in the 1995 one-shot SPIDER-MAN 2099 MEETS SPIDER-MAN by Peter David and Rick Leonardi. Then, Dan Slott began weaving the young warrior into his own webs of intrigue in SUPERIOR SPIDER-MAN (2013), AMAZING SPIDER-MAN (2014), and the epic SPIDER-VERSE story.

Since then, Miguel has starred in two SPIDER-MAN 2099 volumes jumping between our present and his, both penned by Peter David. In recent issues of AMAZING SPIDER-MAN (2018), we've come to learn that Miguel's stuck here again, and the Wall-Crawler of the present wants to find out why and what effect this stay will have on the future.

But who is Miguel O'Hara and why is he such a big deal to the year 2099? For that answer, we need to look back at the year 1992. That's when Marvel launched a new imprint called 2099 that mostly featured well-known titles with very different twists, set over a hundred years in the future.

SPIDER-MAN 2099—launched by Peter David and Rick Leonardi—became the flagship of the entire line, lasting longer than its fellow comics, though DOOM 2099 came close.

Technically, Miguel debuted in a preview of his solo series in the pages of AMAZING SPIDER-MAN #365, but the full story came about in SPIDER-MAN 2099 #1! That book starts off by showing the brand-new Web-Slinger making his way through a future New York City as police—called the Public Eye—chase him on hover bikes. He avoids them and returns to his swank home in Babylon Towers where he reveals that, in the grand tradition of Spider-Man, he's got a lot on his plate. 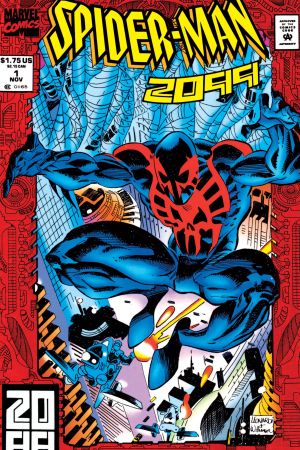 Thanks to a digitally-recorded journal entry, readers came to understand exactly how dire O'Hara's prospects had become. A born genius, Miguel had been schooled by mega-corporation Alchemax and then given a job as a geneticist. He'd been tasked with designing Corporate Raiders, Alchemax-owned spies who would utilize animal-based genetic upgrades to do their masters' bidding. Miguel took inspiration from the original Spidey and began experimenting with arachnid DNA.

The experiments had been progressing slowly but surely for him, but Tyler Stone (the owner of Alchemax) wasn't pleased with his pace. He wanted to see a human test as soon as possible. And when that resulted in a dead subject, O'Hara quit, but Stone dosed him with Rapture, a highly-addictive hallucinogenic drug. Since Alchemax was the only company who could legally produce the drug, Stone schemed that the now-hooked Miguel would keep working there.

Miguel had other plans. To prevent the Rapture from fully attaching to his DNA, he snuck back in to Alchemax and planned to imprint a saved copy of his own DNA onto himself, thus wiping out the drug. The plan would have worked had Aaron Delgato, Miguel's disgruntled underling, not maxed out the equipment and introduced spider DNA into the equation.

The ensuing explosion failed to kill O'Hara, but it did change him. In the ensuing chaos, he scratched the surface of his powers which included increased agility and strength, plus huge fangs and talons in his fingers and toes that allowed for wall-crawling. After grabbing some sleep, Miguel donned a Day of the Dead costume made from unstable molecules he'd purchased the year prior—and a hero was born!

Now, Miguel O'Hara's back and 2099 is in danger. How will he and Peter Park save the day? Read AMAZING SPIDER-MAN #33 by Nick Spencer and Patrick Gleason to find out!

Pick up the ish at your local comic shop tomorrow, November 6!

Maximum Carnage Is Unleashed on Marvel 2099 in 'Spider-Man 2099: Dark Genesis'

Writer Steve Orlando returns to 2099 with artist Justin Mason in new Spider-Man 2099 limited series this May.