Get To Know Your Guardians: 8 Essential Collections

After you see the blockbuster film, continue your adventure with these Guardians of the Galaxy graphic novels!

From their original adventures in the MARVEL SUPER-HEROES anthology series all the way to their current capers in GUARDIANS OF THE GALAXY, Marvel’s premier team of cosmic heroes have nearly 40 years worth of adventures for you to enjoy after seeing their big screen debut. With so many comics on bookshelves, it might be hard to single out the best—and most essential—collections available. With that in mind, here’s a list of eight Guardians of the Galaxy collections to get you started!

Think the Guardians were always worthy of guarding the galaxy? Think again! Watch the original Guardians squad save the day with the help of Earth’s Mightiest Heroes! Featuring the familiar faces of Captain America, Doctor Strange, the Thing, the Hulk, and many more!

2. Star-Lord: Guardian of the Galaxy

STAR-LORD: GUARDIAN OF THE GALAXY TPB

Just in time for his big-screen debut, Star-Lord’s sensational seventies sci-fi sagas are collected here in one volume! Experience Peter Quill’s quest for vengeance following his mother’s murder at the hands of evil aliens!

3. Guardians of the Galaxy by Jim Valentino Vol. 1

Jim Valentino brings you this gripping Guardians adventure to you all the way from the 31st century! Join original Guardians Vance Astro, alien archer Yondu, and a Mercurian named Nikki as they keep the galaxy safe from cosmic-level threats! 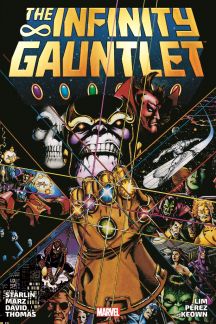 Jim Starlin’s seminal work charts the Mad Titan Thanos’ rise to dominance! With the cosmically powerful Infinity Gauntlet on his hand, the death-obsessed maniac makes quick work of every single hero in the Marvel Universe. Will they be able to stop Thanos from killing the entire universe?

5. Guardians of the Galaxy by Abnett & Lanning: Complete Collection Vol. 1

GUARDIANS OF THE GALAXY BY ABNETT & LANNING: THE COMPLETE COLLECTION VOL. 1 TPB

This is it! The material that inspired the smash hit “Guardians of the Galaxy” film. Witness the birth of the current Guardians team as Star-Lord, Gamora, Drax, Groot, Rocket, and more band together to face threats both cosmic and strange!

After the Guardians of the Galaxy disbanded, Rocket Raccoon settled into a quiet life with a steady job in a mailroom. But when a killer clown made of sentient wood attacks him at work, the trigger-fingered and quick-witted hero must journey to Planet X, home of his old buddy Groot! 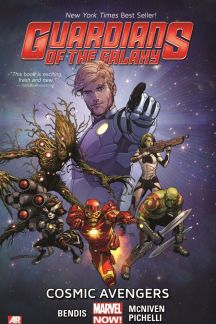 Brian Michael Bendis teams up with Steve McNiven and Sara Pichelli to launch the Guardians of the Galaxy into the spotlight. Everyone’s favorite Guardians board their space ship, and this time they have one extra passenger: Iron Man!

Thanos has returned to the Marvel Universe and now seeks to bring his own brand of order to all that occupy it. With a sworn enemy at his side, the Mad Titan embarks on a brand new quest to conquer the galaxy!

For more out of this world adventures, check out the current GUARDIANS OF THE GALAXY series on Marvel Unlimited!