The team comes together to face the threat of Ultron and the Phalanx!

Peter Quill inadvertently allowed the Phalanx to infect the Kree World-Net and many of its people in the pages of ANNIHILATION CONQUEST PROLOGUE. To make up for it, he led a team consisting of Rocket Raccoon, Groot, Mantis, Captain Universe, Bug, and Deathcry to stop further invasions.

That mission ended in relative success despite Deathcry’s accidental death from friendly fire and Captain Universe losing his power to become regular Gabriel Vargas again. The Kree wasted no time in sending the surviving members of Star-Lord’s crew off on another mission in ANNIHILATION CONQUEST by Dan Abnett, Andy Lanning, and Tom Raney.

With Ultron revealed as the force behind the Phalanx’s invasion, the team returned to Hala where they awaited Blastaar’s apparent death to release pollen spoors provided by Groot. With those pieces of Flora Colossus floating around, Mantis used her mental abilities to create a map of the villains’ headquarters. The team used this information to break into the Babel Spire in an attempt to set charges and blow the place sky high. Instead, a Phalanx-controlled Blastaar appeared to kill Vargas and capture Star-Lord. 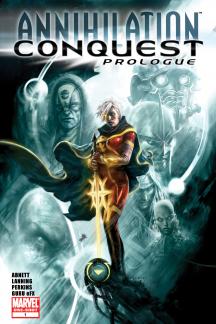 While Quill felt the intensity of Phalanx torture techniques, the other survivors developed a new plan that involved Groot growing large enough to fill most of the Babel Spire and Mantis setting him ablaze using her pyrokinetic powers. The strategy succeeded in spite of its craziness and Groot used up his last conscious thoughts to save his teammates from certain death as they leapt away from the crumbling Spire.

All of this allowed for other heroes like Nova, Drax, and Gamora to enter Kree space and get in on the fight with Ultron who subsequently took over the body of Adam Warlock. Though an eventually-restored Warlock and Quasar handled much of the heavy lifting in the ensuing battle with a giant Ultron, Star-Lord and company did their best to hold off the Phalanx soldiers.

At the end of the story Peter Quill had an idea he wanted to share with Quasar and Adam Warlock, Bug sat at Mantis’ hospital bed and Rocket watered his clipping of Groot which lead directly into the first GUARDIANS OF THE GALAXY arc by Dan Abnett, Andy Lanning and Paul Pelletier.

Before moving on too far from this initial group of proto-Guardians, let’s talk a bit about the ones who didn’t make it to the actual series. Deathcry first appeared in AVENGERS #363, published in 1993, created by Bob Harras and Steve Epting. A member of the Avengers for a time, the Shi’ar warrior left the team in AVENGERS #399 and eventually found her way to Kree territory where they arrested her for murdering seven “low-brow or craven” Kree. She briefly returned in the pages of CHAOS WAR: DEAD AVENGERS.

Meanwhile, Gabriel Vargas took on the Uni-Power in the pages of AMAZING FANTASY #14 from 2005. The quadriplegic war veteran brought his military training and attitude to his missions which continued on into a series of CAPTAIN UNIVERSE one-shots. Eventually, he also ran afoul of the Kree and wound up in their prison where he eventually met Peter Quill.

With the preliminary proceedings out of the way, it’s time to jump into GUARDIANS OF THE GALAXY #1-6 by Dan Abnett, Andy Lanning and Paul Pelletier!