The Guardians head to Earth to back-up Captain Marvel against Iron Man!

When a friend needs help, the Guardians have their back. So, when Captain Marvel called at the end of GUARDIANS OF THE GALAXY #10, the team flew to Earth with a quickness to get involved in Civil War II. The conflict swirled around a young Inhuman named Ulysses who seemed to be able to predict the future. Tony Stark saw the danger in someone abusing this kind of power while Carol Danvers decided to use every tool at her disposal to keep Earth safe. The ensuing event left War Machine dead at Thanos’ hands, She-Hulk comatose, and the super hero community in a shambles.

GUARDIANS OF THE GALAXY #11–14 by Brian Michael Bendis, Valerio Schiti, and guest artist Kevin Maguire showed what the team got up to when not appearing in the main book, CIVIL WAR II, which you can read about below. The first issue actually kicked off with the team voting on whether they should assist or not. Just about everyone wanted to go but Rocket and Thing. Rocket preferred space to Earth while Ben Grimm didn’t want to get wrapped up in another battle between friends. Still, the group decided to go. 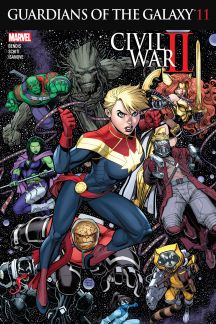 When they arrived, Carol filled Star-Lord in on what had happened up that point, specifically the presence on Earth of Thanos, who had been locked up after the fight in CIVIL WAR II #1. Peter and Kitty then struggled with whether to tell Gamora and Drax this information or not. Ultimately, they decided not to. We see the CIVIL WAR II #4 fight from a few different angles, including Rocket’s reaction to losing the ship he called home. Of course, things got so much worse when Gamora finally heard about her father’s Earth-bound captivity.

The most dangerous woman in the galaxy started making her way through guards until Captain Marvel herself stepped in to end her rampage. The two fought until Carol let slip that Quill knew about Thanos as well. Feeling betrayed on all sides, Gamora told Danvers to let Peter know that they are officially done before roundhouse kicking Captain Marvel in the face.

When the rest of the team found this out, they also left Peter and Kitty to their own devices, effectively ending the Guardians of the Galaxy. To lessen the blow, Bendis and Maguire flashed back in issue #14 to show how the group saved Spider-Man from Skrulls and why that added to Rocket’s distaste for Earth.

In the actual CIVIL WAR II series by Bendis, David Marquez, and other artists, the Guardians first appeared at the very end of issue #4. Carol faced off against the seemingly more powerful group backing Iron Man on the top of the Triskelion, but then her old teammates popped up out of nowhere to even the sides. The next issue kicked off with a huge brawl that included Miles Morales poking fun at Rocket Raccoon and then running into Venom for the first time. During the fight, the Guardians’ ship got destroyed, which set up the rest of the series until its conclusion. Later, after everyone saw Ulysses’ vision of Miles killing the original Captain America and the fight ended, Peter Quill told Carol that he totally related to her decision to use the Inhuman’s abilities to save whoever she could. The Guardians didn’t play much of a role at the end of the story, but were set up to spend the final arc of their own series on Earth.

Next, Brian Michael Bendis, Valerio Schiti, and some impressive guest artists close out this GUARDIANS OF THE GALAXY run with “Grounded”!

In this article: Civil War II