Earth’s Mightiest Heroes found themselves in quite the predicament as writer Brian Michael Bendis and artist Mark Bagley’s AVENGERS ASSEMBLE series launched in 2012. The newly minted Zodiac seemed far more powerful than ever, but that made more sense by the end of the third installment when Thanos revealed himself as their mysterious benefactor. Luckily for the team, the Guardians of the Galaxy flew in to help out at the end of the next issue.

Star-Lord, Rocket, Groot, Gamora, Drax, and Bug accompanied the Avengers into space where they battled the Badoon and then a powered-up Thanos who had gotten his hands on an experimental Cosmic Cube created by the U.S. Government. Thanks to the collective experience of both teams and a trip to the Cancerverse where they met up with the Elders of the Universe, all present succeeded in saving existence. 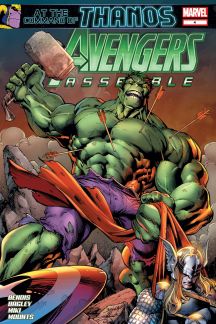 This, of course, led into the Bendis-written GUARDIANS OF THE GALAXY series that launched in 2013 with art by Steve McNiven and Sara Pichelli. Without yet getting into how Peter or Thanos escaped the Cancerverse as seen at the end of THE THANOS IMPERATIVE, the new book kicked off with a .1 issue that showcased Quill’s origin as the half-human, half-Spartax prince supposed to act as Star-Lord for his planet, but who wanted nothing to do with their war-mongering empire-building past.

Speaking of which, his dad, King J-Son of Spartax, worked with a council of galactic empires that included the Kree Supreme Intelligence, the Brood Queen, Gladiator of the Shi’ar, Annihilus of the Negative Zone, Freyja of Asgard, and Y-Gaaar of the Brood Brotherhood. They decided that, since Earth looked to jump into the cosmic fray as a legit power in the next few generations, they should all just avoid it. Making it official, they declared Earth off limits to any and all space-faring people. 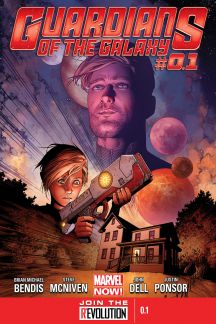 The Badoon Sisterhood, however, had other ideas in mind as they immediately attacked Earth which brought about some defense from the Guardians who had been joined by Iron Man after their previous space adventure. Even after being captured by J-Son’s soldiers for breaking the new edict, the Guardians used their cunning to escape from prison and send a message to the people of the Spartoi conclave about how their leader sentenced his own son to essentially die in prison. As you can imagine, the king did not take kindly to that action and it will have consequences ringing throughout the series.

Before we lose track of him again, let’s talk about the sometimes-Guardian known as Bug! The insectoid alien first appeared in the licensed Micronauts comics of the 80’s. As part of the deal back then, existing characters based on toys reverted to the licensees while new creations remained as part of Marvel’s stable. Since Bill Mantlo and Michael Golden made him for the comic, we still get to enjoy Bug’s adventures to this day!

Aside from an appearance in CABLE #39 and his own one-shot in 1997, Bug lay dormant for a while until getting captured by the Kree and becoming part of the proto-Guardians as seen in ANNIHILATION CONQUEST: STAR-LORD. For unknown reasons, he didn’t make the cut when Star-Lord formed the actual Guardians, but came back into the fold after the team broke up following the first arc and Rocket needed warriors he could trust. Bug then appeared in the AVENGERS ASSEMBLE run, but not the soon-to-follow relaunch, both written by Bendis.

Next, in addition to meeting Angela, the team faces off against Thanos once again in GUARDIANS OF THE GALAXY #4-10.