Star-Lord takes control of the Spartax and the Guardians regroup!

After the events of Secret Wars—which we covered last time—the Guardians looked a bit different than before. Stalwarts like Rocket, Groot and Drax remained as well as newer additions like Venom, but two major pick-ups made their presence known as soon as GUARDIANS OF THE GALAXY by Brian Michael Bendis and Valerio Schiti re-launched: Ben Grimm, aka The Thing, and Kitty Pryde, now calling herself Star-Lord.

Of course, that left one big question for readers: where’s Peter Quill? Well, as the title hinted at, he took over as the Emperor of Spartax, but not having a great time of it. There also seemed to be some bad blood between the former Star-Lord and his former team that came to light as the latter landed on Spartax just in time to see a beaten Gamora crash to the surface. The most dangerous woman in the galaxy apparently ran afoul of Hala, a Kree warrior who first appeared in the GUARDIANS OF KNOWHERE series. She blamed the Guardians for the destruction of the Kree home world, which Mister Knife actually planned during the Black Vortex crossover.

Not interested in understanding their side of things, Hala smashed the Guardians before trapping Peter in a satellite so he could watch her destroy one of his planets before moving on to Earth. The people of Spartax had something to say about that, though, which gave the Guardians enough time to cause their specific brand of chaos. After getting Quill back, the team then faced Hala once again and put her down. 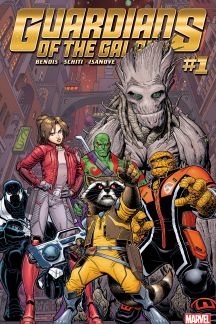 Instead of having time to celebrate, though, they found themselves faced with yet another challenge—and another GUARDIANS OF KNOWHERE character—in the form of Yotat, who dubbed himself the destroyer of destroyers. Another huge battle ensued, this one also ending in a victory for the team, but a big hit for Quill. As it turned out, the people really in charge of Spartax didn’t appreciate their planet coming under fire from two ridiculously powerful beings on the same day. As a result, they kicked Peter off planet, which actually suited him just fine as he rejoined his pals and went off to save Angela…but that’s a story for the next entry!

GUARDIANS OF THE GALAXY #5 featured a flashback to three months prior and the events of the main story set on Knowhere. While familiarizing Ben Grimm to the outer space lifestyle, Kitty, Flash, Rocket, and Groot all ran into Yotat for the first time. Our heroes jumped into the fray, but another group actually took over: the Guardians of Knowhere. This squad consisted of Cosmo, Bug, Moondragon, Mantis, and Prism. The first four characters have clear connections to the Guardians, with many being former members. They’ll show up one more time before this wild trip comes to a close!

Next, newly reunited, the team runs a multi-pronged attack on the Brotherhood of the Badoon to get Angela back!