Guarding the Galaxy: Get Angela

The Guardians pull off an epic scheme to save one of their own!

In the wake of Peter Quill’s disastrous reign as the leader of Spartax, the Guardians focused on one task: freeing Angela from the Badoon. That’s the thrust of Brian Michael Bendis and Valerio Schiti’s GUARDIANS OF THE GALAXY #6–10. The intricate plan involved Peter and Kitty Pryde infiltrating a prison planet. In an effort to wipe that evil out of existence, Kitty wrecked shop on the joint, but Peter got captured and sentenced to a kind of gladiatorial combat.

Meanwhile, Rocket and Thing attacked another prison area while Groot and Venom discovered a huge group of Skrulls who had had their shape-shifting abilities removed by their captors. Drax and Gamora led a more direct attack that resulted in the latter’s apprehension. Of course, the place her jailers took her to also housed Angela. The most dangerous woman in the universe used up the last bit of the cosmic energy she received from the Black Vortex to save her friend and sometime teammate. 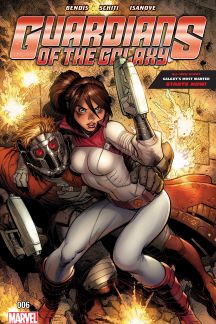 With everyone in place—including Star-Lord sentenced to die in an arena—the Guardians attacked, backed by many of the people they saved from the various prisons. Earning a victory with their blood and sweat, Angela stood with the former leader’s head in her hand. “The Badoon brotherhood is no more!!! Your days of enslaving and terrorizing the galaxy are over!!! We leave you to restructure your entire view of yourselves!!! You will fix what you have done or you will be destroyed! I will destroy you! The entirety of Asgard will come here and destroy you!”

With that, the Guardians left the planet to deal with itself, but almost immediately found themselves headed to another one: Earth, where a second Civil War and a request for aid from Captain Marvel awaited…

Angela first appeared in the Marvel Universe in the pages of AGE OF ULTRON and then palled around with the Guardians in the previous volume. The forsaken daughter of Odin starred in ANGELA: ASGARD’S ASSASSIN, which ran for six issues in 2015; Kieron Gillen, Marguerite Bennett, Phil Jimenez, and Stephanie Han delved into both her past and her place in the cosmos. During Secret Wars, she appeared in books like A-FORCE, M.O.D.O.K.: ASSASSIN, and 1602 WITCH HUNTER ANGELA. After the Guardians saved her from the Badoon prison as seen in this story, she also featured in ANGELA: QUEEN OF HEL, which ran for seven issues and came from Bennett and Kim Jacinto.

Next, the Guardians head to Earth, smashing face-first into Civil War II and their own batch of problems in GUARDIANS OF THE GALAXY #11-15 by Bendis, Schiti, and guest artist Kevin Maguire.