Can Peter Quill escape his father in time to save his friends?

The Guardians of the Galaxy made plenty of enemies in the first year of writer Brian Michael Bendis’ run on their book. In addition to continually embarrassing King J’Son of Spartax, they also interfered in a Shi’Ar trial and continually put the beat down on the Badoon. So, it didn’t come as an incredible surprise when their foes made a big play, taking the team members out when they were alone or in pairs. Bendis began the tale in GUARDIANS OF THE GALAXY #14 and carried through issue #17 with artists Nick Bradshaw, Cameron Stewart, Todd Nauck, David Marquez, Michael Avon Oeming, and others.

Spartax ships captured Star-Lord and Rocket in a space fight, an Accuser bounty hunter nailed Gamora, and the Shi’Ar grabbed Drax, leaving new member Agent Venom behind to fend for himself. That proved just the beginning of the trouble, though. Rocket wound up being experimented on by the Kree Supreme Intelligence’s best scientists while Drax found himself facing Gladiator in combat. Gamora’s captor delivered her to the Badoon homeworld to pay for earlier transgressions, Skrulls experimented on Venom’s symbiote, the Brood stranded Groot on a desert planet, and J’Son imprisoned his son.

In an attempt to escape, Peter Quill jumped off a building while still handcuffed only to have Captain Marvel swoop in and grab him. After getting his gear back, Star-Lord humiliated his dad on intergalactic broadcast. This time, the people of Spartax listened and decided to overthrow their leader. 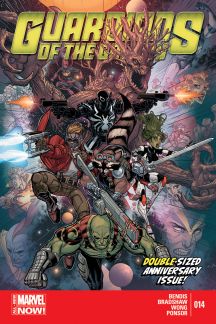 As Star-Lord and Captain Marvel flew away, they got in contact with Gamora, who had been saved by Angela. After reuniting, they travelled to get Drax, who had entered into mortal combat with Gladiator. The Kree then returned Rocket of their own volition and gave the Guardians Groot’s coordinates.

However, when the team returned to Knowhere to get Venom, he hid so they couldn’t find him. He’d been separated from the symbiote by a rogue band of Skrulls, but they failed to control it like he could. Flash Thompson and Venom reunited, but something obviously changed in the warrior, as will be explored in a future installment.

You might have noticed that Agent Venom appeared in this arc as a new member of the Guardians. To get the full story on how that happened, check out the FREE COMIC BOOK DAY 2014 special. In the story, Tony Stark—who had left the group by then—talked to Flash Thompson about using his Venom symbiote to represent Earth on the team. As they spoke, Stark summed up the Guardians pretty well for new readers while also setting Flash up for what he’d be in for when he joined. The other Guardians welcomed him into the fold pretty quickly. Drax recognized the symbiote but could not yet place it. That’s a story for another time!

Next time, LEGENDARY STAR-LORD shines the solo spotlight on Peter Quill as he tries to make a long distance relationship work with Kitty Pryde and dodge the murderous efforts of Mr. Knife.