Discover what happened to Star-Lord, Nova, and Thanos in the Cancerverse!

One of the biggest mysteries ever surrounding the Guardians of the Galaxy finally got answered as part of the Original Sin event in the pages of Brian Michael Bendis’ first run on the series during issues #18–20. Drawn by Ed McGuinness and Valerio Schiti, these issues explained exactly what happened to Star-Lord, Nova, Drax, and Thanos when they locked themselves away in the Cancerverse at the end of THE THANOS IMPERATIVE. Readers knew that Peter Quill along with Drax and Thanos had mysteriously returned from that death-defying dimension sans Nova, but didn’t know the how or the why until Gamora literally knocked Star-Lord out, tied him to a chair and demanded to hear the truth.

Peter Quill and Richard Rider sealed themselves in the Cancerverse armed with their powers as well as a Cosmic Cube in an effort to imprison Thanos there and then kill him, probably losing their own lives in the process. After the two sides beat up on each other for a bit, the Mad Titan tried stopping the aggression, telling Quill that he should hand over the Cube in order for them to escape. The heroes didn’t think that such a great idea, but the conversation officially ended when Drax reappeared, surprising all as he had apparently died earlier in THANOS IMPERATIVE. 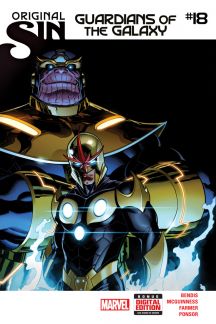 The ensuing battles proved one basic thing: this quartet from another dimension could not die in the Cancerverse. Adding to the problems, the Cube nearly took over Star-Lord and then the Revengers appeared to wreak their own brand of havoc. Understanding that the never-ending cycle of battle, death, and rebirth would become a kind of hell they did not envision when developing this plan originally, the heroes wanted to return home. Ultimately, Rider used the combined power of the Nova Force and the Cosmic Cube to become a door through which they could venture back to the Marvel Universe.

Before sacrificing himself, Nova ran down some of his never-to-be wants and desires, including an admission that he loved Gamora. He also made Peter and Drax swear not to tell her what happened to them on this adventure. With that, they blinked back to existence on Earth and the rest, as they say, is history.

The GUARDIANS OF THE GALAXY: ORIGINAL SIN trade collection not only included the above story, but also the symbiote-themed tale seen in issues #21–23. Still wandering around Knowhere, Flash Thompson seemed to have gone nuts along with his Venom symbiote. Thanks to happenstance, Gamora showed up, beat him down and then recaptured her teammate. After Groot, Rocket, and Drax got taken over by the alien “costume,” the last one got them all to the planet of the symbiotes—otherwise known as the Klyntar—where they healed Venom and upgraded his interface with Thompson. The story also set up the idea that the Klyntar actually fancy themselves intergalactic protectors, but noted that many hosts offer plenty of problems, especially if they’re damaged like Venom and Carnage. This then lead directly into the VENOM: SPACE KNIGHT series that lasted for 13 issues!

Next time, find out the big deal about this whole Black Vortex thing in an epic crossover event!