Star-Lord returns to Spartax with surprising results for the Guardians!

In the wake of saving the universe from the Black Vortex, the Guardians of the Galaxy celebrated in their usual manner; in other words, they got sloppy at a space bar. This time, they had something else to be happy about too, as Kitty Pryde agreed to marry Star-Lord! As we picked up with the group in GUARDIANS OF THE GALAXY #26–27 by writer Brian Michael Bendis and artist Valerio Schiti, the team found another interesting piece of information that left them wondering about their future: Peter Quill had been elected President of Spartax.

Back in issue #22 a Spartax political adviser named Togth suggested they run Peter for President without his knowledge. By #26 the people of Spartax elected him, but he didn’t even know to report for duty! Around that same time, Quill and the Guardians heard about his appointment while hanging out in the aforementioned interstellar pub. Peter admitted that he’d actually heard about it, but figured it would just disappear. That proved not to be the case when the Spartax Royal Guard showed up to take Quill back to his new constituents. 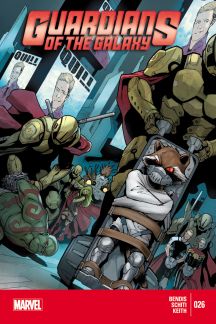 Thinking quickly, Star-Lord offered the members of the Guardians places on his cabinet so they could all travel to Spartax with him. Once there, the people who put him up for election tried convincing him that he and the Guardians could do a lot more good with the planet’s resources instead of their usual space pirate methods.

While he mulled that over, the living planet Kindun appeared along with its Chitauri inhabitants. As her partners face off against the invaders, the still-Black-Vortex-upgraded Gamora headed directly to the leader and offered him the chance to leave as a way to prove that she had significantly distanced herself from her adoptive father, Thanos. The idea worked, but Gamora decided to leave the team because she felt like a danger to them.

This all left Peter with some big questions to answer, chief of which boiled down to whether he’d become President of Spartax…

For one more bit of Guardians fun, do yourself a favor and check out GUARDIANS OF THE GALAXY ANNUAL #1 from 2014. The tale, by MIGHTY AVENGERS collaborators Brian Michael Bendis and Frank Cho, featured the team running into a strange sight, even for them: a S.H.I.E.L.D. Helicarrier in deep space! They were even more surprised when a jetpack-wearing Nick Fury boarded their ship and then took them to his, commanded by classic agents like the Contessa, Jimmy Woo, Dum Dum Duggan, Gabriel Jones, and Jasper Sitwell. Before they could ask too many questions, an attacking ship of Skrulls appeared to blast them to dust. Captain Marvel knew something was up with all this and did the sleuthing to figure out what really happened. We’ll keep a mystery for now so you can enjoy it for yourself!

Next time, before leaping into the reality-bending events of Secret Wars, we’ll look at Skottie Young’s fantastic ROCKET RACCOON series!