As Brian Michael Bendis’ first volume of GUARDIANS OF THE GALAXY ended, a new one did not immediately appear to take its place because reality fell into chaos thanks to Jonathan Hickman and his runs on NEW AVENGERS and AVENGERS leading into Secret Wars. Like the rest of the Marvel Universe, our cosmic heroes got sucked into the craziness of the event both in the main series and in its spinoffs. In the pages of Hickman and Esad Ribic’s SECRET WARS, Star-Lord and his team fought against Ultimate Iron Man, until Peter Quill found himself teleported aboard Reed Richards’ life raft ship designed to survive the end of everything. Eight years later, Peter and the others on the craft awoke to find Doctor Strange and a new reality crafted by God Doom—formerly Doctor Doom.

Once free, Peter escaped to Manhattan where he took on the name Steve Rogers and became a singer in a club run by a fancy version of Drax as seen in STAR-LORD AND KITTY PRYDE by Sam Humphries and Alti Firmansyah. One day while crooning along, he was shocked to see his long lost love, Kitty, enter the establishment. However, unbeknownst to Quill, this version of Ms. Pryde came from Apocalypse’s realm and worked for Doom’s daughter Valeria in her efforts to clean up any scientific evidence that a world existed before the creation of Battleworld. Literally chained to one another for a time, Peter came to understand more of the hardships this Kitty had gone through while also trying not to die at the hands of Gambit the Collector. With that adventure behind them, both went their separate ways. 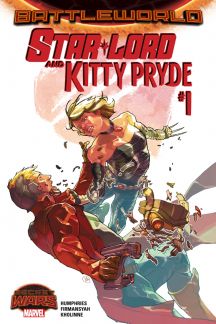 For Peter, that meant reuniting with his fellow heroes from the previous reality and trying to take down Doom in SECRET WARS. To his part, Peter flew two Reed Richards into the field of battle. While he repaired his ship, a Black Swan got the drop on him, but Quill unleashed his secret weapon: a tiny piece of Groot! The talking tree caused enough of a distraction—and just the right amount of destruction—to let the other good guys rush in, take care of Doom, and replace Battleworld with an approximation of the old reality!

While Peter helped save reality and ran around with Kitty, his fellow Guardians found themselves hanging out on Knowhere. In the new reality, the story followed that Doom decapitated a Celestial and left it in Earth’s orbit to prove how great he is. Bendis and Mike Deodato set their four-issue GUARDIANS OF KNOWHERE here, appropriately. In the story, Rocket, Drax, Mantis, and Gamora struggled to stop first Yotat’s reign of terror and then Hala’s attacks. During their exploits, we got to see a Thor version of Angela as well as a Nova Corps consisting of Richard Rider, Moondragon, Iron Man, Venom, Adam Warlock. and Captain Marvel. Though set in a different reality, these four issues really set up the next arc of Bendis’ new GUARDIANS OF THE GALAXY series and should definitely be read before jumping into that book.

Brian Michael Bendis and artist Valerio Schiti show Kitty picking up the Star-Lord mantle while Peter acts as Emperor of Spartax in a new GUARDIANS OF THE GALAXY volume.

Earn Points, Get RewardsJoin NOW!
In this article: Secret Wars (2015)