Guarding the Galaxy: The End

All roads lead to Thanos as several threads come to a chaotic conclusion!

The final issues of GUARDIANS OF THE GALAXY by Dan Abnett, Andy Lanning, Brad Walker, and Wes Craig not only tied in with the larger Realm of Kings story, but also offered a satisfying conclusion to this iteration of the team. Star-Lord, Rocket Raccoon, Drax, Jack Flag, Bug, Groot, and Moondragon attempted to move on after the deaths of Phyla-Vell, Cosmo, Major Victory, Mantis, and Gamora at the hands of their former teammate Adam Warlock-turned-Magus. The Fault, created by Black Bolt at the end of War of Kings, offered more than enough distraction as it threatened the very existence of reality.

Upon exploring the Fault, Knowhere’s other super group the Luminals brought back a dangerous entity that the Universal Church of Truth wanted to turn into their new god. In the middle of a chaotic situation, as the entity looked for a new host, Moondragon absorbed it into herself. The pregnant-looking warrior used all of her telepathic ability to keep the beast contained. While playing host, Moondragon glimpsed exactly what stood on the other side of the Fault: the Cancerverse.

Moondragon’s concentration came under fire after Luminal leader Cynosure attached herself to the Guardian with cuffs that would kill both if tampered with. Making matters worse, members of the Church then burst in and kidnapped them, taking the women to a converted planet called Orison. Once there, the Matriarch intended for Moondragon to give birth to their new god.

As you might expect, the Guardians didn’t feel like following that plan and jumped in to smash it up, going so far as to fly Knowhere directly through the Church’s fleet. Between that and the combined efforts of the Guardians and Luminals, they freed Moondragon, contained the god in a tube, and shot it back into the Fault.

With all that out of the way, Moondragon wanted to find Phyla who actually still remained in the land of the living along with Cosmo, Mantis, Major Victory, and Gamora, but at the hands of the also-not-dead Adam Magus. That group worked to free itself from confines on Sacrosanct while the others defended the new Galactic Council from a Fault attack. 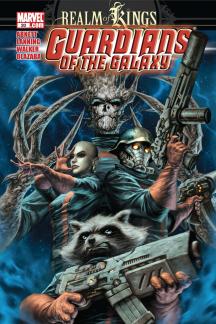 The victory of escape came with knowledge of something even worse, though as Phyla witnessed the rebirth of Thanos! Enraged, the Mad Titan destroyed her with a quick eye-blast. The whole team reunited on Sacrosanct in time to face off against the rampaging Thanos.

Star-Lord pulled out one of his biggest trump cards and used it to calm the Titan down when he used his Cosmic Cube to subdue Thanos. With the villain contained, the group gathered to gather in Starlin’s once again to toast the return of their comrades, but also the death of Martyr.

Well, if you couldn’t tell so far, that Adam Warlock can be one complicated character! His first real appearance as the cocooned “Him” came in FANTASTIC FOUR #67, but THOR #166 unleashed the gold-skinned godling onto the reading public. Before long, he began traveling the spaceways where The High Evolutionary partially named him Warlock and gave him the Soul Gem. Later he teamed up with Gamora, Pip the Troll, and Thanos to take on Magus and the Universal Church of Truth. Magus turned out to be a future version of Adam that had been driven mad by the Soul Gem. Later, Adam Warlock helped defeat Thanos in the pages of INFINITY GAUNTLET and walked away with the title weapon himself.

Instead of keeping the Gauntlet, Warlock distributed the Gems to Gamora, Drax, Moondragon, Pip, a then-reformed Thanos and himself. The team, Infinity Watch, fought together many times, but eventually lost the Gems. Warlock continued fighting cosmic threats, but required rehabilitation, which explains why Phyla and Moondragon found him in his cocoon in ANNHILATION: CONQUEST – QUASAR. As he explained in Annihilation: Conquest, Adam holed up because he felt so many souls screaming as Annihilus’ forces wreaked havoc during Annihilation, but Phyla and Moondragon awoke him too soon. Not fully healed, this new Adam Warlock differed from previous versions, but still did everything he could to keep the galaxy safe.

If the Mad Titan stands as the universe’s only hope, what chance do the Guardians have of surviving? Find out in THANOS IMPERATIVE!