Guarding the Galaxy: The Trial of Jean Grey

Enter the X-Men as the Shi’Ar Empire goes after the mighty mutants!

The past has a way of catching up with you, even if it’s technically your future.

That’s the kind of life lesson most people can’t relate to, but most people aren’t the time-displaced Jean Grey from ALL NEW X-MEN. She and her pals traveled to the present and continue to be awed by the way the world turned out. Of course, that initial shock didn’t hold a candle to the mind-blowing surprise of aliens popping out of the sky and kidnapping their psychic teammate, an event that kicked off a crossover with GUARDIANS OF THE GALAXY called “The Trial of Jean Grey.” Brian Michael Bendis wrote every issue—GUARDIANS OF THE GALAXY #11–13 and ALL-NEW X-MEN #22–24—with artwork by Sara Pichelli, Stuart Immonen, and David Marquez.

All the trouble started when Gladiator and the Shi’Ar empire decided to punish the young mutant for the crimes her older self committed under the influence of the Phoenix Force. Even J’Son of Spartax thought the idea seemed a bit thin, but that didn’t stop them from following through. The Guardians got wind of the plan and decided to help, but arrived on Earth too late to actually save Jean Grey, so they gathered the young X-Men—including X-23 at that point—to travel with them into space and track the errant X-Man down.

While the Shi’Ar held Jean, they informed her of her charges, yet another revelation that left her wide-eyed. At the same time, the Guardians and X-Men continued to give chase, getting some help from the Starjammers along the way. Emotions continued to run high as the young Scott Summers met his dad Christopher, otherwise known as the cosmic pirates’ leader Corsair. 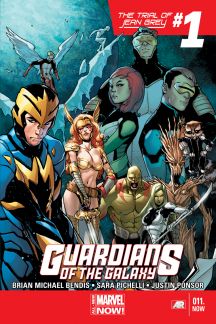 Jean Grey’s hearing continued on with Gladiator officially leveling charges against her. In a surprising move, J-Son appeared out of nowhere to challenge the legitimacy of the claims, which inadvertently stalled the proceedings so Jean could escape and her friends could land on the planet. During the final conflict with Gladiator and the Imperial Guard, Jean developed some new powers that her other self never possessed. This proved, to some extent, that this young woman could not be the same person who committed murder on a planetary level. With that new information, the Shi’Ar agreed to let her go.

With the immediate trouble out of the way, most of the X-Men returned to Earth—Scott decided to travel around with his dad in his own solo series—and the Guardians got back to their own endeavors.

With everything going on in this crossover, you might be surprised to find that it also planted the seeds of romance between Peter Quill—Star-Lord—and Kitty Pryde. Before returning to the stars, Peter handed Kitty a space phone that would allow them to chat anytime. “Call me,” he said. “Just to whine about the universe.” To see how that goes down, keep your eyes peeled for an upcoming post!

Next time, Brian Michael Bendis continues his run on the Guardians by disassembling the team and then building them back up with all new members!

In this article: Guardians of the Galaxy, X-Men, Shi'ar