Guarding the Galaxy: To Infinity and Beyond

The team meets Angela, battles Thanos once again, and much more!

Writer Brian Michael Bendis’ first arc on GUARDIANS OF THE GALAXY may have dropped the team in the middle of intergalactic politics, but the second—issues #4–10, specifically—introduced them to a brand new lifeform and mixed them up with another Thanos plot to destroy the Earth. The legendary Neil Gaiman also helped work on some of these stories, drawn by Sara Pichelli, Olivier Coipel, Valerio Schiti, Francesco Francavilla, and Kevin Maguire.

As the team celebrates a victory, Iron Man and Gamora sneak off to get friendly, after which Tony calls Pepper Potts and the deadliest woman in the galaxy finds herself targeted by Maxilin the Accuser. She gets back on her feet and gives him trouble, but he proves formidable enough to nearly kill her until the Guardians appear and Rocket takes him out.

After that, Peter meets up with former Guardian Mantis to talk about a vision he received that revealed the past and future to him all at once. She couldn’t help, but did suggest he talk to an old foe. Meanwhile, Angela—who debuted at the end of AGE OF ULTRON #10—hits the scene and immediately goes toe-to-toe with Gamora.

As that battle rages, Star-Lord meets with the previously alluded to individual: Thanos. He’d also seen a vision, but knew the truth behind it: “The Earth is doomed.” Why? Because they messed with time and space way too many times. Peter, as you might expect, doesn’t like this revelation.

Eventually, the Guardians get the drop on Angela and lock her up. Peter returns, hears her story and releases her from captivity so she could head to Earth and see it for herself. 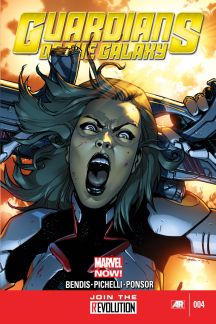 Back in the vicinity of Quill and Stark’s home planet, the Guardians answer a distress call from Abigail Brand, head of S.W.O.R.D., who has been overtaken by Thanos’ forces in the pages of INFINITY. Even Angela gets in the action.

Finally, in the last issue of this batch, Gamora and Angela bury the hatchet and team up to blast the Brotherhood of the Badoon on their home planet of Moord in an attempt to find the missing Thanos. They even learn the truth that he’s on Earth, but don’t believe the source and head back into space towards their next adventure!

Between issues #9 and #10, the Guardians got involved in Jonathan Hickman’s Infinity, which saw the Avengers teaming with all kinds of alien races to defeat Thanos and the Builders. However, our heroes only popped up after saving Abigail Brand in the sixth and final issue of the event’s core limited series. The Guardians played an important part in the overall battle that ended with Thanos frozen in a statue-like state. That didn’t last long as Namor freed the Mad Titan in NEW AVENGERS, but even the being who’s nearly destroyed reality more times than we can count fell quickly to Emperor God Doom in the pages of SECRET WARS. Of course, he returned along with everyone else in the All-New, All-Different Marvel Universe in books like THE ULTIMATES and CIVIL WAR II.