Guarding the Galaxy: War of Kings

As the Inhumans and Shi’Ar wage war, the Guardians and Starjammers attempt to rescue Lilandra!

If there’s a cosmic conflict in the works you can bet the Guardians of the Galaxy will get involved in some way. While their presence in the actual WAR OF KINGS series might seem limited, the space-bound super-squad still played a huge part.

Before getting into the specifics of War of Kings, a brief history lesson might be in order. At this point, the Shi’Ar found themselves ruled by Vulcan, the long-lost Summers brother. Unfortunately for everyone involved, Gabriel Summers boasted Omega Level mutant powers in addition to all-out insanity. He first appeared in X-MEN: DEADLY GENESIS, then cut a swath of destruction through the “Rise and Fall of the Shi’Ar Empire” storyline in UNCANNY X-MEN #475–486, X-MEN: EMPEROR VULCAN, and X-MEN: KINGBREAKER.

Meanwhile, after Black Bolt had been revealed to be a Skrull impostor during Secret Invasion, the real deal returned to the throne and soon led his people from the Blue Area of the Moon to Kree space as seen in SECRET INVASION: WAR OF KINGS. After finally meeting with Ronan, Medusa explained that the Kree-created Inhumans would help lead them down a new path if The Accuser would pledge fealty. He did and a wedding between Ronan and Crystal promised to publicly unify the two groups.

Which brings us directly into the events of WAR OF KINGS by Dan Abnett, Andy Lanning, and Paul Pelletier. Vulcan saw the nuptials as the perfect opportunity to lay waste to the Kree. The assembled Kree warriors, the Inhumans, and the Starjammers fought off the attack, but Ronan still fell with great injuries and the Royal Guard made off with former Shi’Ar queen Lilandra. In the wake of the attack, Crystal attempted to sooth the Kree’s souls while the Royal Family discussed plans to launch a full scale attack on the Shi’Ar. Though the decision didn’t immediately sit well with the Kree, they get on board as the conflict came to a head. 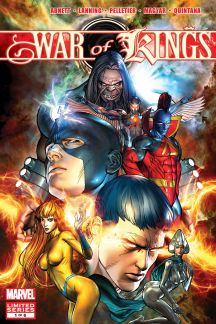 In the pages of issue #3, the Guardians—specifically Rocket, Major Victory, Drax, and Groot—lend a hand to the Starjammers in their mission to get Lilandra back. In the process, Royal Guard leader Gladiator finally gave in to his conscience and stopped his team members from hurting his former queen. The plan worked, but Lilandra ultimately met her end when the Death Commandos struck. Thrown into a fit of rage, Gladiator took out his one-time liege’s killers as Black Bolt and the Inhumans launched the devastating T-Bomb with the leader aboard.

As the people declared Gladiator the new Majestor, Vulcan teleported on to the T-Bomb to battle Black Bolt. The two kings wound up fighting to the death as the bomb erupted causing a hole in time and space. Hey, that sounds exactly like the kind of thing the Guardians of the Galaxy worked to fix. We’ll see how they do exactly that in the next installment!

The best way to experience the full War of Kings event is to sign in to Marvel Unlimited, head into the Events & Crossovers section and click on the event itself. Doing so will run you through everything from X-MEN: KINGBREAKER to WAR OF KINGS SAGA with everything in between like the NOVA issues, the WAR OF KINGS: WARRIORS spotlights, and the Darkhawk-centric WAR OF KINGS: ASCENSION four-issue limited series.

Next, as promised, the Guardians work first to stop the war and then to fix the Time-Space Continuum!