Jason Aaron and Roland Boschi rev up the action in Ghost Rider!

You‘d think that discovering you’d been working for angels instead of demons would be good news, but then again, you’re not Johnny Blaze. Everyone’s favorite flaming skull motorcycle enthusiast came to understand that an angel named Zadkiel had been pulling his strings this whole time before Jason Aaron took over the GHOST RIDER series in 2008. That gave the future DOCTOR STRANGE scribe a great place to start and a clear mission for his star: get Zadkiel.

For Aaron’s first arc, starting with GHOST RIDER #20 and running through #23, the writer and artist Roland Boschi set the tone for one of the most wild, violent, and supernaturally stacked runs on the character to date that felt like a great mix of horror and grindhouse action. Not a fan of having the wool pulled over his fiery eye sockets, Blaze decided that he needed to have a face-to-face with this Zadkiel character. While traveling through New Beulah, out hero heard about a kid named Lucas who had a near death experience and came back terrified of angels. That seemed like a good enough place to start, so Johnny paid the boy a visit in the hospital.

Before he could even talk to the young man, Blaze ran into a mountain of a woman who told him to kick rocks. He listened for about a minute and then drove his bike straight through the doors, grabbed Lucas and took off with him. Not to be outdone, the head nurse ordered her underlings to grab a ton of guns and follow them. After getting a night’s sleep, Lucas explained that, when he briefly died he found the gates to Heaven locked and Zadkiel looking to succeed where Lucifer failed. Lucas even remembered working on their siege engines until he returned to the land of the living. 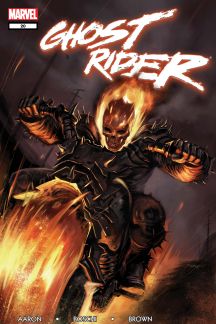 Before Blaze could leave the kid and go off on his own mission, the nurses—who served Zadkiel—shot Lucas in the side. They tried running off again, but their pursuers caught up and nearly destroyed the Rider with a drop of Zadkiel’s fiery rain; howerre they made the mistake of threatening the Rider’s bike and he went nuclear on them. The chase continued with Johnny accidentally leading them all to Highway 18 which happened to be haunted by the ghosts of a bunch of cannibals that hadn’t given up their eating habits. These ghouls proved powerful enough to not only separate Lucas from his new friend, but also give the Rider a run for his money.

The last issue of the arc ended with a huge collision between Ghost Rider, the nurses, a bus, and the only living member of the family of ghost cannibals! At the end, just about everything went wrong, but Johnny Blaze rode away with a bit more information that he’d use to get his revenge in later issues of Aaron’s tenure.

In this story we just begin to see how Blaze’s fellow Ghost Rider, Danny Ketch, played into the larger story. The character took over as the Spirit of Vengeance in the 1990-launching GHOST RIDER series. Eventually, Blaze returned to active duty leaving Ketch behind. As we found out in Aaron’s series, Ketch missed the power so much that he agreed to work for Zadkiel in order to regain the mantle of Ghost Rider. Danny even went so far as to gather a group of villains like Orb, Doghead, Death Ninja, and Blackout to aid in their efforts. Eventually he and Johnny worked things out, though, as you can see in the endcap to this epic, a limited series called GHOST RIDERS: HEAVEN’S ON FIRE.

Tomorrow, the X-Men find themselves facing off against a psychic vampire and an army of mostly dead mutants!