Treat yourself to this tricky lupine tale!

Sam Wilson and Steve Rogers have a lot in common.

Friends and comrades, they both fight for the rights and ideals of all people in their roles as super heroes. Both have worn the mantle of Captain America and slung the shield.

And both have been turned into wolf-men! 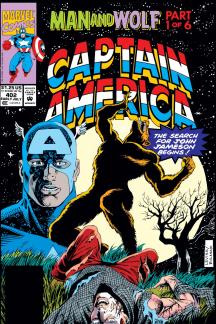 The Wilson series began with more than a little turmoil for the new Cap as he took a stand on issues that his predecessor might’ve remained silent on. Having gone rogue from the supervision of S.H.I.E.L.D. and the U.S. government, Sam restarted the legendary Captain America hotline, which allowed citizens to contact him directly. Though the line largely got flooded with nonsense, Wilson did hear about some trouble with the Sons of the Serpent in Arizona.

When he looked into the matter, Cap discovered the Sons kidnapping immigrants and selling them to a mystery man in New York City. As the case unraveled, Sam discovered the anonymous buyer to be Dr. Karl Malus.

In CAPTAIN AMERICA: SAM WILSON #3, the Star-Spangled Avenger made his move, ambushing the Doctor at his secret lab. Wilson expected to arrest the criminal with relative ease, though, upon arrival, he encountered a symbiote-enhanced Malus, who knocked the hero unconscious. While in this state, the Doctor used Cap in another twisted experiment—and turned Sam Wilson into a half-wolf, half-man! 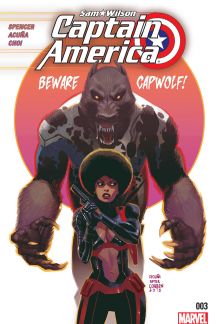 Now a lupine beast, Sam escaped before teaming up with Misty Knight to confront the mad scientist once more. Though this time, Malus had gathered an army of human-animal hybrids to enter the fight on his behalf! Despite the challenge, Capwolf and Misty managed to subdue Dr. Malus before turning him over to the authorities. The villain got his due, but Cap remained in his doglike state.

The following issue, Wilson’s enhanced sense of smell, wolfish temper, and tendency to dine from trash cans proved difficult for the hero to contain—and often made life difficult given his already-rocky reputation with the public.

The condition continued for Cap over the next several issues, even as he came head-to-head with Steve’s old flame Diamondback and fought the newly formed Serpent Solutions. Eventually, however, Sam Wilson returned to his usual form—as Cap, no longer Capwolf.

In another thread of this story, Dr. Malus wove the DNA of Sam’s avian companion Redwing into the body of a young man named Joaquin Torres. Torres emerged from the process as a bird man, though utilized his hybrid condition for good, taking on the Falcon mantle. Redwing’s innate healing ability, though, meant that—unlike Cap’s hybridity—Joaquin would never revert back to his initial form.

Redwing, Sam’s longtime partner in the skies, actually had another monstrous encounter in ALL-NEW CAPTAIN AMERICA #5. In that issue, Baron Blood bit the bird, seemingly killing him. This proved to be misleading, however, as in the next issue, Redwing emerged anew—as a vampire falcon!

Tomorrow, witness cosmic power go up against the demonry of Mephisto in the pages of SILVER SURFER!