What happens when you mix a couple of alien symbiotes, a werewolf, and an ancient book of evil? You get the first arc of writer Gerry Conway and artist Mike Perkins’ CARNAGE! 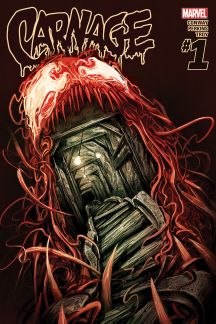 The team decided to utilize a West Virginian mine as a trap. Joined in the pursuit by the mine’s owner Barry Gleason, the group successfully caged Carnage inside the mine and attempted to bombard the beast with sonic blasts that would render the symbiote powerless. Their idea went to plan…until the mine shaft collapsed.

Stuck in the dark with no way to get out, Man-Wolf leapt to action, taking on Carnage in a wild battle, clawing and crashing through the mine. As Dixon and Calderon followed behind, Brock unleashed his own symbiote powers, joining the fight as it tumbled further into the shaft.

Gleason pursued Carnage as well—and lured him into an ancient underground temple, where a group of evil worshippers called the Darkholders attempted to sacrifice Carnage, whom they had interpreted to be “the Red Slayer”—a reference made in their mystical tome, the Darkhold. Their ploy failed, however, and the mix of dark magic and symbiote only served to enhance Carnage, giving him the ability to extend his alien powers to other people…including Claire Dixon. 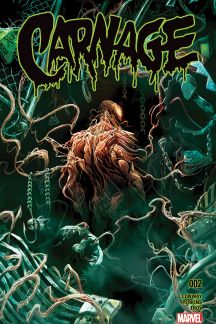 Carnage has perpetrated some heinous acts over the years.

He suffocated a man with his symbiote with his very first appearance in AMAZING SPIDER-MAN #360. He threatened Matt Murdock, Foggy Nelson, Luke Cage, and Jessica Drew at the Raft in NEW AVENGERS #2, before The Sentry managed to grab Carnage, fly to space, and rip the murderer in half! These events, however, seem menial compared to the villain’s long and storied history of opposition to Spider-Man.

Tomorrow, see how a team of reality-hopping heroes handle a world of vampires in EXILES!