The reality-jumping squad faces off with some bloodsucking Avengers!

In most realities, the Avengers act as a shining example of heroism. However, as readers of EXILES will know, alternate dimensions offer plenty of surprises.

For those that haven’t read the series, the members of the Exiles got extracted from their various timelines to complete missions on behalf of The Time Broker. These players would get sent to an alternate reality, receive instructions on their mission, solve the problem, and move on to the next time and space.

In EXILES #31 and #32, by writer Judd Winick and artist Jim Calafiore, an Avengers team got transformed into vampires! In this reality, Captain America became the Vampire King after defeating the previous ruler. And before long, the bloodsucking Steve Rogers turned his fellow Avengers into the supernatural creatures as well. 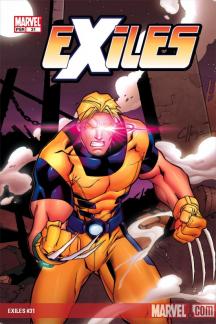 At this point, the dimension-hopping, reality-saving Exile team consisted of Mimic, Magik, Nocturne, Sunspot, Morph, and Sasquatch. Their stated duty in this place was to stop the Vampire King “from releasing the enchantment that will enslave a city.”

To tackle the problem, the Exiles called Union Jack, who revealed that Cap and his evil Avengers recently stole a mystical totem that had the power to create millions of undead minions at once!

The Exiles geared up, using stakes, holy water, and crosses to bring the fight to Cap, Hawkeye, Polaris, Giant Man, Wasp, and Falcon. And the battle proved heartbreaking. On his own world, Mimic and Cap were great friends, though on this one, they tried killing each other. Mimic even decapitated Rogers—but the vampire simply put his head back on and flew away! During the brawl, Hawkeye got the drop on Sunfire and bit her on the neck!

In response, Magik teleported the Exiles to Union Jack’s estate to try and handle Sunfire’s rapid transformation. He told the group that killing the Vampire King would save her, but they’d need a Soul Sword to complete the task. Luckily for everyone, however, Magik carried that exact weapon! 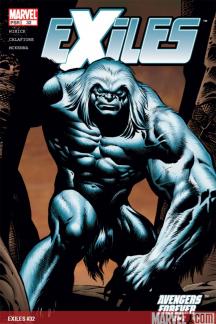 The Exiles and Union Jack faced off against Cap and the Avengers one last time. The Vampire King saw defeat—though the Exiles didn’t get their full victory as they attempted to leave the reality, Cap used his powers to scatter them separately across the multiverse.

Given the high number of alternate realities they visited, the Exiles had a tendency to run into horror-themed worlds. They frequently fought enemies who looked and sounded exactly like their closest friends and allies back home. Once, they even took on an alt-version of one of their fellow reality-hoppers, Weapon X!

Tomorrow, check back in for a t-t-terrifying review of Garth Ennis and Russell Braun’s WHERE MONSTERS DWELL!