Ennis and Braun send The Phantom Eagle on a nightmare journey!

One of the most satisfying elements of a scary story emerges when a bad guy gets his comeuppance. And writer Garth Ennis crafted an entire story from that concept when he joined artist Russell Braun for their Secret Wars: Warzones limited series WHERE MONSTERS DWELL!

The series stars a World War I pilot by the name of Karl Kaufman, A.K.A. The Phantom Eagle, who Ennis previously wrote in the MAX series WAR IS HELL: THE FIRST FLIGHT OF THE PHANTOM EAGLE. Though unlike previous incarnations of the masked aviator, Karl revealed himself as a womanizing jerk that refuses to accept the changes of the world around him—and the book actually begins as he leaves his pregnant girlfriend behind on an island for a more “exciting” life. 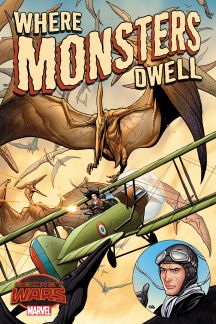 He then jumped at the chance to help a seemingly naïve woman named Clementine Franklin-Cox, who offered him a big sum to fly her to Singapore. They immediately ran into trouble, however, when a strange and massive storm transported them stranded in a world of dangerous animals and hungry dinosaurs.

After leading a T-Rex into a local village so it would eat the inhabitants and allow him to escape, Karl returned to Clementine. Her supposed naiveté, though, proved to be a front, as she quickly asserted herself and took over their mission for survival. She led them through a shark attack and a crocodile encounter—and eventually forged a path to an island nation of Amazon-like women.

Revealing her “Sapphic tendencies” to Kaufman, Franklin-Cox reveled in the idea of staying with these women, free of the shackles of society and the oppression of men. Not long after their arrival, Kaufman saw a plane wrecked in a tree and soon discovered that any man unlucky enough to come upon the island was caged and used strictly for the continuation of the local race. When he found a group of prisoners, The Phantom Eagle tried freeing them, but quickly got caught by the native women. 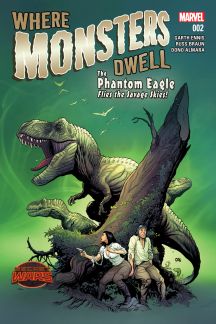 Facing painful punishment, Clemmie convinced the woman to exile him instead. Kaufman, now on his own, made his way to another local tribe that happened to be at war with the female clan. He convinced them to go to battle with the women, though the plan saw an early demise as the group encountered a mega shark in the bay.

Kaufman survived, though, and met up with Clementine, who revealed that her brother served alongside the pilot during the war—and that her journey to Singapore merely served as a ploy to escape the police after she murdered her husband.

Once again, the two ventured off—this time using Karl’s plane as a river raft before using the speed gathered near a waterfall to kick start its engine. Once airborne, they flew directly into the mysterious storm they saw earlier, and soon found themselves far from the dinosaur land, back in their own time and place.

In true horror fashion, though, Kaufman’s victory proved short lived as he crash landed and paddled, again, to a stranded island. This enclave turned out to be the same one he left his wife on at the start of the story.

Longtime Marvel fans will recognize the title of this book—the original WHERE MONSTERS DWELL debuted in 1970 and ran for 38 issues until 1975. Each book featured reprints of classic monster stories from the pre-super hero days of Marvel. In 2005, the title made a comeback as part of the MARVEL MONSTERS series, which gave writers and artists the opportunity to revisit some of the classic behemoths from the House of Ideas.

Tomorrow, lighten up the Halloween mood with SPIDER-MAN: THE SHORT HALLOWEEN, written by Seth Meyers, Bill Hader, and Kevin Maguire!