Get a healthy dose of rotten luck with this dark comedy!

You might think that getting decapitated in a horrible accident might be the worst thing that could happen—but Mort Graves thinks otherwise!

Writer Larry Hama and artist Gary Hallgren’s four issue limited series MORT THE DEAD TEENAGER began with the title character foolishly challenging his school rival, Lance Boyle, to a drag race. Mort borrowed his dad’s Studebaker in hopes of impressing his crush, Kimberley Dimenmein, but Lance swooped in and picked her up before Mort had his chance.

The ensuing challenge led the duo to the local train tracks. Ready to race—and hyped to win the girl—Mort forgot that his dad hadn’t restored the car’s breaks…which resulted in a deadly collision and a headless Mort.

Then Mort woke up. 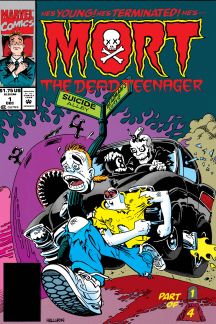 He found himself in the Netherworld—in conversation with Teen Death. Soon assigned to his new undead duty—haunting his parents’ house—the Dead Teenager witnessed the painful sight of his mom and dad’s casual acceptance of their son’s demise.

Even Mort’s friends didn’t seem too broken up about his passing. His buddies, Weirdo and Slick, quickly used his concert tickets for themselves—and didn’t even seem to care when he tried to give them a ghostly scare.

To Mort’s further disappointment, Weirdo and Slick joined a band—with Kimberley as the lead singer! In an attempt to disturb their first jam session, Mort tried messing with the equipment—but that only made the band sound so loud that Weirdo’s dad offered to start booking them gigs.

Soon, Mort found himself wandering around with Teen Death again. This time, he came to see three different versions of what life might’ve been like had he not been decapitated. These visions, however, weren’t so positive either.

Despite this, Teen Death imparted a lesson to Mort: “The point is that anything is better than being dead! That pain and suffering and embarrassment and mental anguish and excruciating shame are really terrific compared to being non-existent for eternity!”

And with that mindset in place, Mort set off to change his ways…until he woke up and realized that it all had been a dream.

Well, maybe not. Mort’s fate remained unresolved as he grabbed his dad’s car to meet up with his friends—and saw Teen Death once again…this time driving the train that seemed to have killed him before.

MORT THE DEAD TEENAGER didn’t have much of a life beyond this initial series. But the original is jam-packed with visuals—creative team Hama and Hallgren threw plenty of amazing Easter eggs into the story. From a certain animated bus driver to a video game icon, readers will catch plenty of nods to pop culture in the series—and might get a few laughs from the signs and graffiti in the books’ backgrounds.