Daimon Hellstrom breaks into his own devilish solo series!

The son of Satan, Hellstrom rebuked his lineage and swore to destroy his father’s influence across the world. Though strong and imbued with supernatural abilities, Daimon had to worry about unleashing the malevolent force of Darksoul, which resides within him.

Daimon Hellstrom debuted back in 1973’s GHOST RIDER #1 before taking center stage in SON OF SATAN two years later. Written and drawn by the likes of John Warner, Jim Mooney, Sonny Trinidad, Craig Russell, Ed Hannigan, Bill Mantlo, Archie Goodwin, Russ Heath, and John Romita, the series began with Hellstrom returning to his childhood home on Fire Lake in New England. Upon his arrival, he noticed that someone had broken into the place and stolen his mother’s diary. He immediately assumed that his demonic dad did the deed. 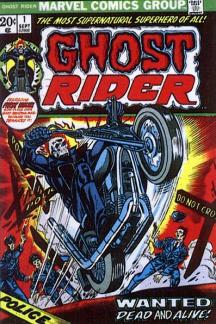 Satan, though, denied his involvement and sent his son to the mortal realm, where both the diary and a masked man called The Possessor awaited Hellstrom in the lake house. The Possessor tormented him before disappearing—though after discovering the demonic origins of the visitor, Daimon took off for The Gateway to Hell.

The Possessor sat waiting for him there—and when Hellstrom arrived, the new foe took possession of him. Embodying Daimon’s soul briefly, The Possessor was cast out when Satan himself intervened. And to finish him off, the Son of Satan unleashed the power of the Darksoul to do away with the villain’s power. During the violence, however, the battle destroyed the Fire Lake house—and sealed all gateways to Hell.

Having concluded that adventure, Hellstrom moved to Washington, D.C. in an effort to rejoin the human race. Hellstrom looked to start anew—and took a job as the head of parapsychology studies and paranormal phenomenon research at a local university. There, Daimon met up with other supernatural beings, including Proffet and Mindstar.

Though SON OF SATAN only lasted eight issues, Daimon Hellstrom propelled to the recurring cast of DEFENDERS, where he would go on to feature for years. Writer Steve Gerber initially brought him on board with issue #24, where he met up with a variety of other unusual characters, from Hulk and Hellcat to Dr. Strange and Luke Cage. He even appeared years later when a new team formed in THE LAST DEFENDERS.