Look back on the history of the Devil’s Daughter!

Satana Hellstrom—sister of Daimon—made her first appearance 44 years ago in VAMPIRE TALES #2. The Roy Thomas and John Romita story showed a man following a woman down a dark alley—and there, before he knew what happened, she consumed his soul. Only at the end the story did the reader come to know this character as Satana, the Devil’s Daughter. 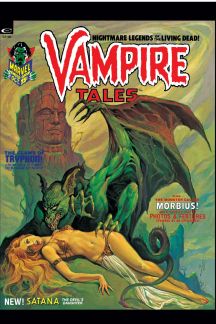 In the following issue, by writer Gerry Conway and artist Esteban Maroto, Satana relocated to Los Angeles where she found herself hounded by a greedy priest named Harry Gotham. In response, as you might guess, Gotham got a fiery end to his story.

After that, Satana occasionally appeared in books such as MARVEL SPOTLIGHT and HAUNT OF HORROR. She even shared center stage with her brother in his 1990s series HELLSTROM: PRINCE OF LIES. She also plays important roles in SUPERNATURALS and WITCHES.

In 2007, the Devil’s Daughter starred in her own LEGION OF MONSTERS one-shot by writer Robin Furth and artist Kalman Andrasofszky. In this tale, Satana mentioned that one of every ten souls she consumes gets sent to get father in Hell. Later, a character named Jen Silence captured Satana in a pentacle and revealed that her twin brother, Jason Silence, received the unlucky trip to the Devil.

The young woman made Satana take a blood oath to find her brother in exchange for freedom from the pentacle. In response, Satana escaped, chained Jen to a dying man, and journeyed to Hell to retrieve Jason. There, in search of the soul, she battled a demon called The Scorpion Queen. 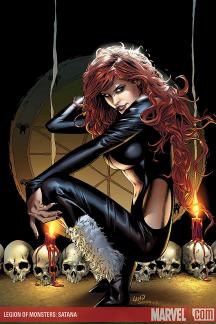 Following an epic battle, Satana defeated the Queen and made off with Jason. Back in her house again, she reunited the Silence twins, but demanded that Jen sign the contract, clearing Satana of further duty. Upon doing so, Jen gave Jason a hug…but he disappeared!

“You said I had to bring him back alive and unharmed,” Satana mentioned coolly, “You didn’t say he had to stay that way.”

Though not exactly a team player, Satana has joined up with other groups on several occasions. In addition to SUPERNATURALS and WITCHES, she also became a major player in THUNDERBOLTS.

In THUNDERBOLTS #155, Dr. Strange and Man-Thing helped team leader Luke Cage find Satana in the Valley of Shandor-Rah. His bosses wanted a magic expert on the squad, so they fought through her defenses and used some trickery to put a magically enhanced collar on her, bringing her on board. The Daughter of the Devil appreciated their deception, but then admitted she would have come along freely of she knew Man-Thing wanted her on the crew!

Next week, return to the Man-Thing with a review of the original 1974 series!

In this article: Satana (Satana Hellstrom)