Happy Birthday to the Guardians of the Galaxy

50 years ago today, the misfit crew made their Marvel Universe debut!

Whatever its team roster, the group known as the Guardians of the Galaxy has been protecting the Marvel cosmos for the last five decades. And now that the group's adventures are on their way in the brand-new GUARDIANS OF THE GALAXY #1 on January 23, we thought it was the right time to stop and celebrate... Because these galactic misfits are celebrating their 50th birthday!

Today marks a half-century since the original release of MARVEL SUPER-HEROES PRESENTS! #18 (subtitled GUARDIANS OF THE GALAXY) on January 10, 1969, which was written by Arnold Drake, pencilled by Gene Colan, and edited by Stan Lee.

Before we blow out the candles on this birthday cake, let’s take an in-depth look at the issue that started it all…

The first-ever Guardian to be introduced was Charlie-27, a native of Jupiter, who descended from Earth-bound humans. Having grown up on the storm-ravaged planet, Charlie-27’s body is adapted for 11 times the mass and three times the gravity of Earth. When we first meet the character, he's returning home after being alone in space for six months.

Upon completing his journey, Charlie-27 realizes that something is amiss as no one is there to greet him. It doesn’t take long for him to discover that the Badoon have taken control of the place and are looking to make a killing on turning in the last free citizen of Jupiter. He makes quick work of the Badoon bounty hunters, but soon finds that the planet is deserted, with its citizens (including Charlie-27’s dad) transported to radioactive labor camps.

Seeing no other way to save his people, Charlie-27 decides to flee Jupiter in search of reinforcements. To get away, he uses “superbly advanced bio-tronics” to turn himself into pure radio waves, although he does not have time to set a specific course. After two hours, he ends up on Pluto, which is also seems to be vacant of life. 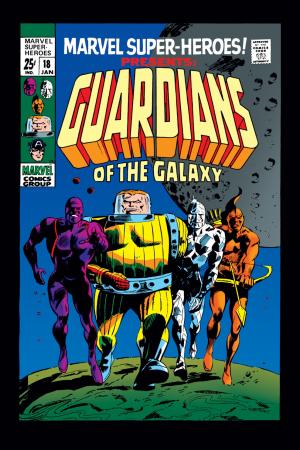 However, the Badoons are also controlling Pluto and sense his presence, sending a Saturnian Hound-Hawk to keep him from escaping. At the very last second, Charlie-27 is given refuge by Martinex, a crystalline rock being from Pluto known as a Pluvian; he’s got the ability to manipulate light waves and even freeze the air. Martinex stayed behind to blow up some industrial complexes, but was unable to escape once Charlie-27 showed up. To take care of the Badoon goons, Martinex activates some robotic servants to attack the antagonists, allowing himself and Charlie-27 to make a run for it.

They set a course for Earth, unaware that it has already been conquered by the Eastern Sector of the Badoon Empire and its leader, Drang. In their custody are two more characters that will make up the Guardians, a Zatoan named Yondu Udonta and Earth’s first intergalactic traveler, Major Astro Vance. Sent into a thousand-year voyage into outer space, Vance must wear a copper protective suit, which, if punctured, could cause him to experience a millennium of aging in one sitting.

Drang recruits Vance to work on behalf of the Badoon and orders him to betray not only mankind, but Yondu as well; Undonta was the native of the planet Vance traveled a thousand years to reach. Vance pretends to treat Yondu with contempt and even requests to execute him with one of the Zaotan’s own arrows, which is actually made of sound sensitive material that responds to Yondu’s every whistle. This allows both prisoners to escape.

Astro and Yondu make a run for it, hoping to get off the planet via a Tele-Port Jump Tube, where Charlie-27 and Martinex have just arrived. Both pairs of acquaintances begin to fight one another, unaware that they are all against the Badoon scourge. At first, the team members were at odds with one another, but eventually the characters realize they’re on the same side and take down some Badoon forces.

All four travel through space to New New York in the hopes of finding a “Free Colony.” All they find is smoldering ruins, but are confident that they will find survivors of the Badoon invasion. The issue ends with all of them chanting “EARTH SHALL OVERCOME! -- SOMEDAY.”

As the narration scroll tells us, this motley group of individuals will one day be known throughout the universe as legendary heroes, the Guardians of the Galaxy.

Read this tale on Marvel Unlimited now! Then jump on board with the brand-new Guardians in GUARDIANS OF THE GALAXY #1 on January 23!