How 'Silver Surfer' Paved the Way for 'Infinity Gauntlet'

On July 1, INFINITY GAUNTLET MARVEL SELECT arrives in your local comic shop in glorious hardcover! Including INFINITY GAUNTLET (1991) #1-6, this prestige edition collects one of the greatest comic book stories ever created—so make sure to pre-order your copy by June 8!

To prep for the release of this titanic tome, we're revisiting the fascinating build-up to that universe-shaking event...

In the 1990s, Jim Starlin, George Perez, and Ron Lim set the standard for cosmic crossovers with INFINITY GAUNTLET. However, the story that returned Thanos to prominence actually began over a year earlier when Starlin and Lim took the reins of SILVER SURFER (1987).

Starlin and Lim’s time with the Surfer proved to have far reaching consequences beyond the rise of Thanos. They also reintroduced several of Starlin’s classic heroes, many of whom went on to join the modern Guardians of the Galaxy. Even decades later, the ripple effects of those issues can still be felt in the Marvel Universe.

It all started in SILVER SURFER (1987) #34, which billed itself as the “1st issue of a new era of greatness.” It lived up to the hype by giving the Surfer a haunting nightmare in which Death’s minions summoned Thanos from beyond the grave and gave him a new mission. At that point, Thanos had been gone for 13 years since his death in MARVEL TWO-IN-ONE ANNUAL (1976) #2. Upon his return, Thanos was warned that Silver Surfer would potentially be the greatest threat to his goals. 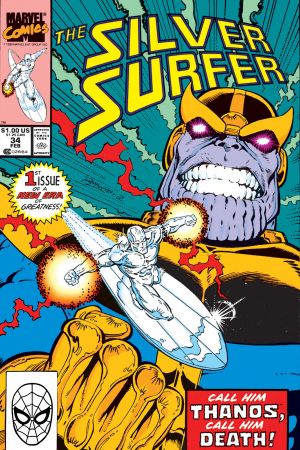 Issue #35 gave the Surfer and Thanos a more formal introduction, as the Mad Titan laid out his case for universal genocide. According to Thanos—and by extension, Death herself—the universe was wildly overpopulated and heading for a cataclysm that would eventually render life extinct. Although the Surfer rejected Thanos’ plans, his message still resonated. But Thanos couldn’t resist tricking the Surfer into accidentally poisoning the inhabitants of Salaria.

That issue also marked the return of another Starlin creation. Kronos, Thanos’ grandfather and a godlike being, declared that “if Thanos once again lives, so must Drax, the Destroyer!" But Drax was greatly changed from his last appearance in AVENGERS (1963) #220. He was much bigger and stronger than ever before. Unfortunately, the brain injuries inflicted upon him by his daughter, Moondragon, meant that Drax began his new life with a severe decline in his mental facilities. 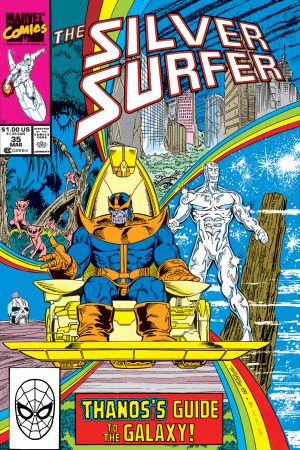 Thanos had a family reunion of sorts in issue #38 as he finally met Nebula, the space pirate who claimed to be his granddaughter. Thanos claimed to be offended at the notion of having children, and he horrifically burned Nebula before leaving her for dead. The veracity of Nebula’s claims has never been proven, but Thanos’ son, Thane, was introduced in INFINITY (2013).

After faking his death to get the Surfer and Drax off of his trail, the Mad Titan took the lead in the two-part miniseries THANOS QUEST (1990). Starlin and Lim also handled this story, which picked up on some SILVER SURFER (1987) threads that predated their run. Essentially, Thanos went after the Elders of the Universe because they held the six Soul Gems. Thanos not only claimed them for himself, he rechristened them the Infinity Gems and achieved ultimate power. 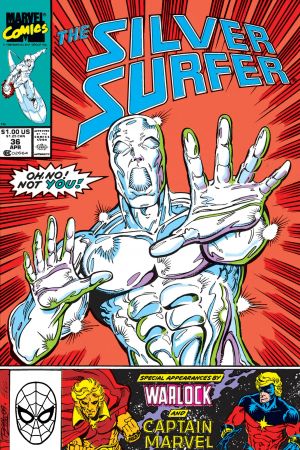 With the Infinity Gauntlet assembled, Thanos easily defeated the Surfer and Drax in SILVER SURFER (1987) #44 by drawing their souls into the Soul Gem. Thanos’ might captured the attention of Mephisto in issue #45, but even the great tempter of the Marvel Universe was helpless before Thanos’ power. Instead, Mephisto tried to gain Thanos’ favor by becoming his lackey...while hoping for a chance to seize the Gauntlet for himself. Thanos also discovered that Nebula was still alive, and he left her trapped between life and death as an expression of “art.”

SILVER SURFER (1987) #46-47 raised the stakes by reintroducing Adam Warlock, Gamora, and Pip the Troll inside Soul World. They facilitated the Surfer and Drax’s escape, before eventually making their own return to the land of the living during INFINITY GAUNTLET.

While in Soul World, Warlock told the Surfer that his soul had been tampered with. That revelation played out in SILVER SURFER (1987) #48-50, as the Surfer immediately guessed that Galactus was responsible. Confronting the Devourer confirmed the Surfer’s suspicions, and he was finally allowed to face his complicity in Galactus’ actions. At the same time, Thanos resurrected his original body and slowed down the Surfer’s attempt to recruit the heroes of Earth.

At Thanos’ hand, the Surfer was forced to remember more painful chapters in his life. But in the end, the Surfer overcame Thanos’ torment before crashing through the window at Doctor Strange’s Sanctum Sanctorum. From there, INFINITY GAUNTLET was finally ready to begin. But these were the issues that gave the crossover even greater depth and dramatic flair.

Read these might mags on Marvel Unlimited today! And pre-order INFINITY GAUNTLET MARVEL SELECT with your local comic shop by June 8, before picking it up on July 1!

Guest writer Torunn Grønbekk and returning artist Nic Klein kick off “The Legacy of Thanos” in 'Thor' #29, on sale in December!