Invincible Iron Man: Who Could Take Up the Mantle?

With Tony Stark missing, here's some candidates for the armor.

Iron Man has gone missing! No, not Ironheart! Or Victor Von Doom as Iron Man… We mean Tony Stark. And not the A.I. either. Oh dear — how confusing.

THE ONE WITH THE BODY — the body that has the goatee? You know, sassy dude. Last seen in a coma due to the events of CIVIL WAR II when he and Captain Marvel duked it out in the skies of Washington, D.C., resulting in his comatose state that has persisted to this day. Now he’s missing and everybody’s freaking out. Okay! Glad to be on the same page. And that page is the first page of Brian Michael Bendis and Stefano Caselli’s INVINCIBLE IRON MAN #594 — The Search for Tony Stark Part 2, available November 22nd wherever comics are sold!

At first when Mary Jane Watson, Friday, Riri Williams, and Tony’s biological mom Amanda Armstrong discover that Tony’s comatose body is missing they wonder if Tony has been kidnapped… but there are no remote life sign readings on the body (he had himself chipped, of course.) Is Tony Stark finally gone for good? Who will be Iron Man now? Well, there are a few qualified contenders. Let’s check them out. 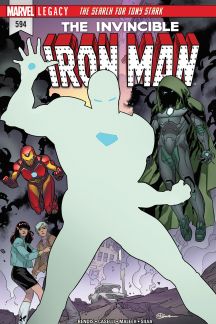 Riri Williams
Riri Williams has been building superhero gadgets since she was ten years old. And don’t misunderstand, these weren’t some little pretend-play doodads — a year later she was given a scholarship to M.I.T. At age 13 she watched her step-dad and best friend get shot to death by a drive-by and from then on she had a mission. Reverse-engineering Iron Man’s “Model 41” suit, she caught the attention of Tony himself. He became a mentor to Riri, and he sent her an A.I. of his consciousness after his incapacitation.

So is she up to the challenge? Well, she’s young, but Riri has all the makings of a first-rate superhero. The only question is whether or not she’d be ready to take on that much responsibility — an issue Pepper Potts has discussed with her in the past. But, after the physically and emotionally draining SECRET EMPIRE, is this 15-year-old re-evaluating her role? Maybe.

Anthony Stark (Third A.I.)
Tony Stark is a man who has a backup plan for his backup plan’s backup plan, so it came as no surprise when he made a backup of his own personality in case anything were to happen to him. The extent of this was unknown to his closest friends and family until fairly recently when it became clear that this wasn’t just an A.I. facsimile but a full-on duplicate consciousness of Tony Stark. “As Zola explains it, you downloaded your actual consciousness into this A.I. matric. Which, by most definitions in modern philosophy, means it’s really you,” Steve Rogers tells the A.I. in SECRET EMPIRE.

If he is Tony Stark, then his destiny is set. But is it really Tony? He doesn’t know, himself. And even if he is, he doesn’t have to be. All of this is terribly philosophical and we here at Marvel are having collective existential crises (AHHHHHHHHHHH) even just muddling over it, so you can only imagine what A.I. Tony is going through. It may not be the best foundation upon which to take on world-shattering responsibility of the Iron Man mantle.

Victor Von Doom
After a poignant battle with Reed Richards in the SECRET WARS event, Doctor Doom admits that his biggest regret in life was not matching up to Reed — no family, no friends, no love, no happiness, no life besides trying to destroy the lives of others. Reed took pity on Doom and restored his face and potentially his soul with the Beyonder’s power. Since that moment Victor Von Doom has been trying to make up for what he did to the world with acts of goodness. He especially took to trying to convince Iron Man, with an unlikely camaraderie beginning to form. When Tony is taken down by Captain Marvel, Doom steals one of his suits and takes up the name of Iron Man — which, to be fair, he could have been calling himself for years if he’d wanted to with that spiffy metal mask bling. Doom begins the long path to redemption as a more troubled Iron Man and even joins the Avengers.

If Tony is really and truly gone, does Doom have what it takes to don the suit on a less temporary basis? There are those who would say no (for example, the girl he magically flayed that one time.) Perhaps the question we should ask isn’t whether he can handle it, though, but whether or not he deserves it after all he’s done. The knee-jerk reaction is “NO WAY JOSÉ, HE KILLED, LIKE, SOOOOOO MANY PEOPLE.” But, if these comics have taught us anything, the answer we’d settle on is… save anyone you can.

Follow along with The Search for Tony Stark Part 2 in INVINCIBLE IRON MAN #594 by Brian Michael Bendis and Stefano Caselli — pick it up November 22nd!