Gear up for a tour of the Ever-Lovin' Blue-Eyed Thing's best bouts of all time!

Right out of the gate, the Fantastic Four came out swinging as a super squad.

Looking back at 1961's debut issue by Stan Lee and Jack Kirby, the team focused their incredible powers against the Mole Man and his minions on Monster Isle. And though Mister Fantastic, the Human Torch, and the Invisible Girl battled well, the Thing proved his raw, rocky strength right away and continues to do so, month in and month out.

The team's resident brawler rushes into fights more often than not and, because of that, has taken part in some of the most phenomenal fisticuffs of all time!

We pulled out our back issues and combed through Marvel Unlimited to come up with some of the must-read examples of the Thing's action-packed adventures from throughout the decades. 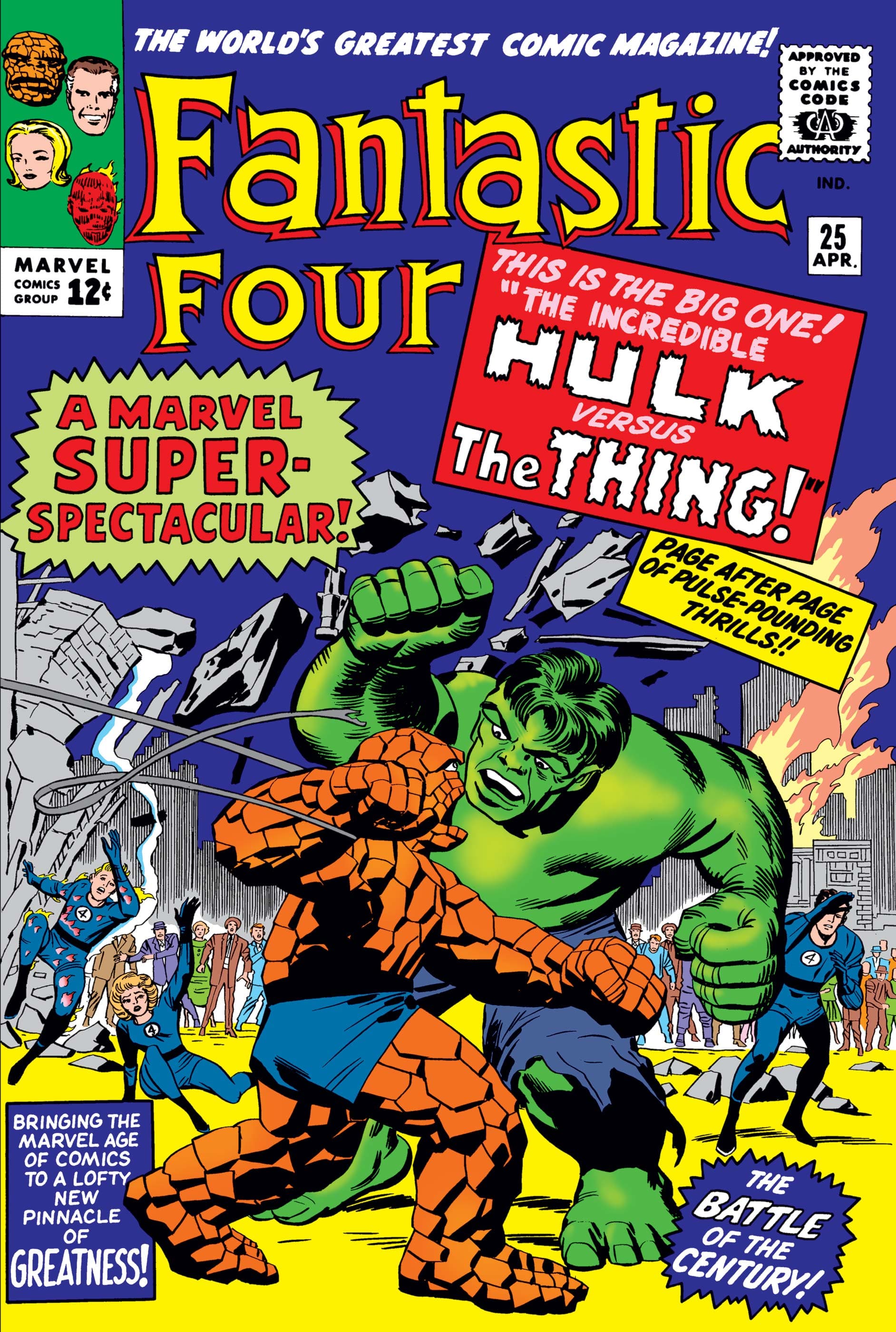 Ben Grimm debuted as the Marvel Universe's heaviest hitter in 1961, but another contender came along to challenge him for the title a year later: the Hulk!

Fans waited until the next year to see the titans tussle in the pages of FANTASTIC FOUR #12 by Lee and Kirby. The resulting issue remains a classic, but Stan and Jack topped themselves with a two-parter in 1963 that ran in FANTASTIC FOUR #25-#26. The brawl tore through buildings, buses, and busy streets before the other members of the First Family joined forces with the Avengers to finally stop the Jade Giant's rampage. 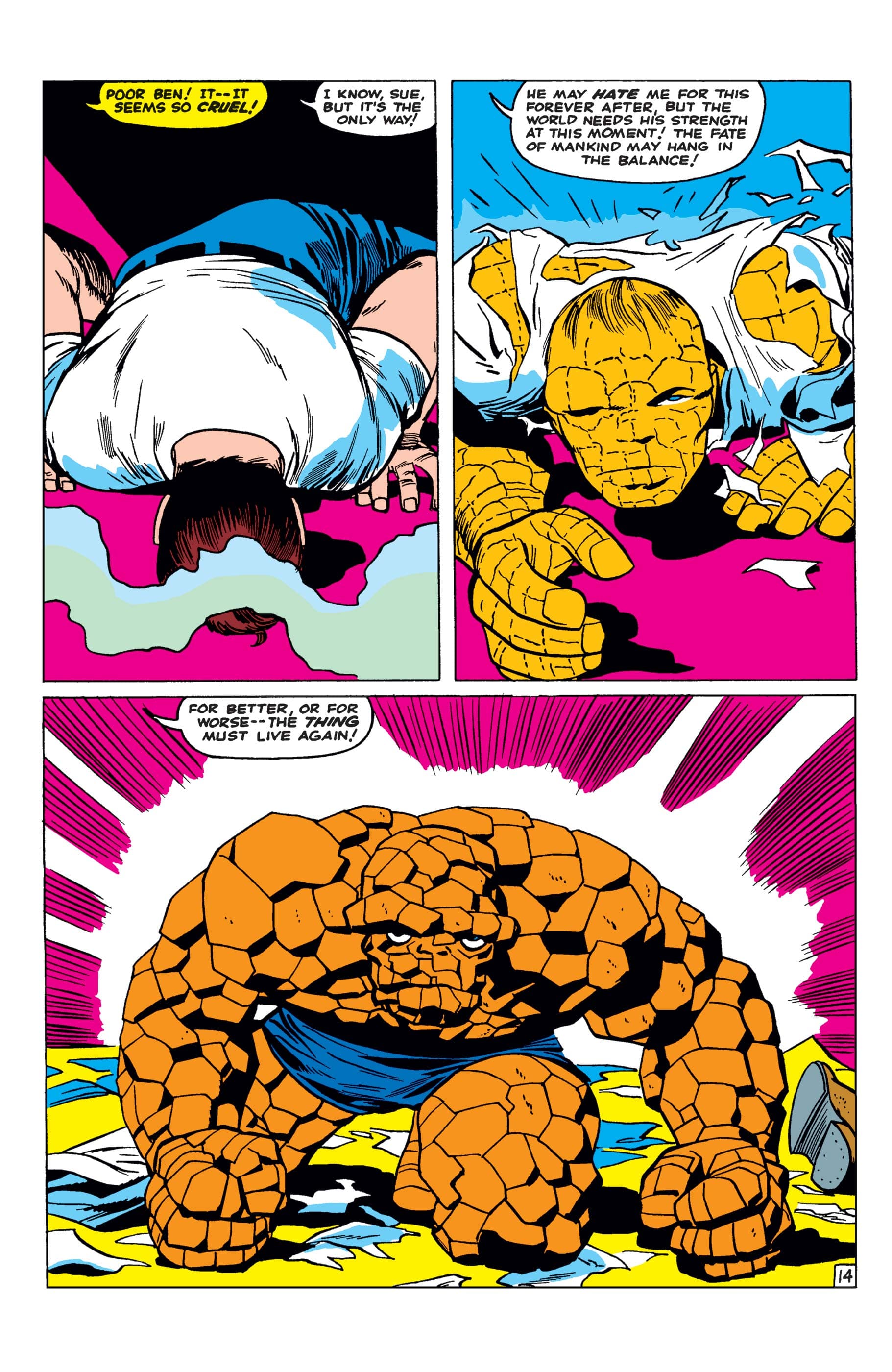 Usually up for a fight, Ben Grimm did not necessarily want to tangle with Doctor Doom in FANTASTIC FOUR #39-#40. He'd just regained his human form, but the team–and the world–needed him to become the Thing once more in order to stop the villain's machinations.

Fueled by pure rage, Grimm attacked the armored despot and quickly wound up on the wrong end of a gravity amplifier. However, he overcame the technological marvel to get back up on his feet and keep fighting. On that fateful day, Grimm proved that, every so often, brawn beats brain as he tore through Doom's armor and left the foreign leader to shuffle away under the umbrella of diplomatic immunity. 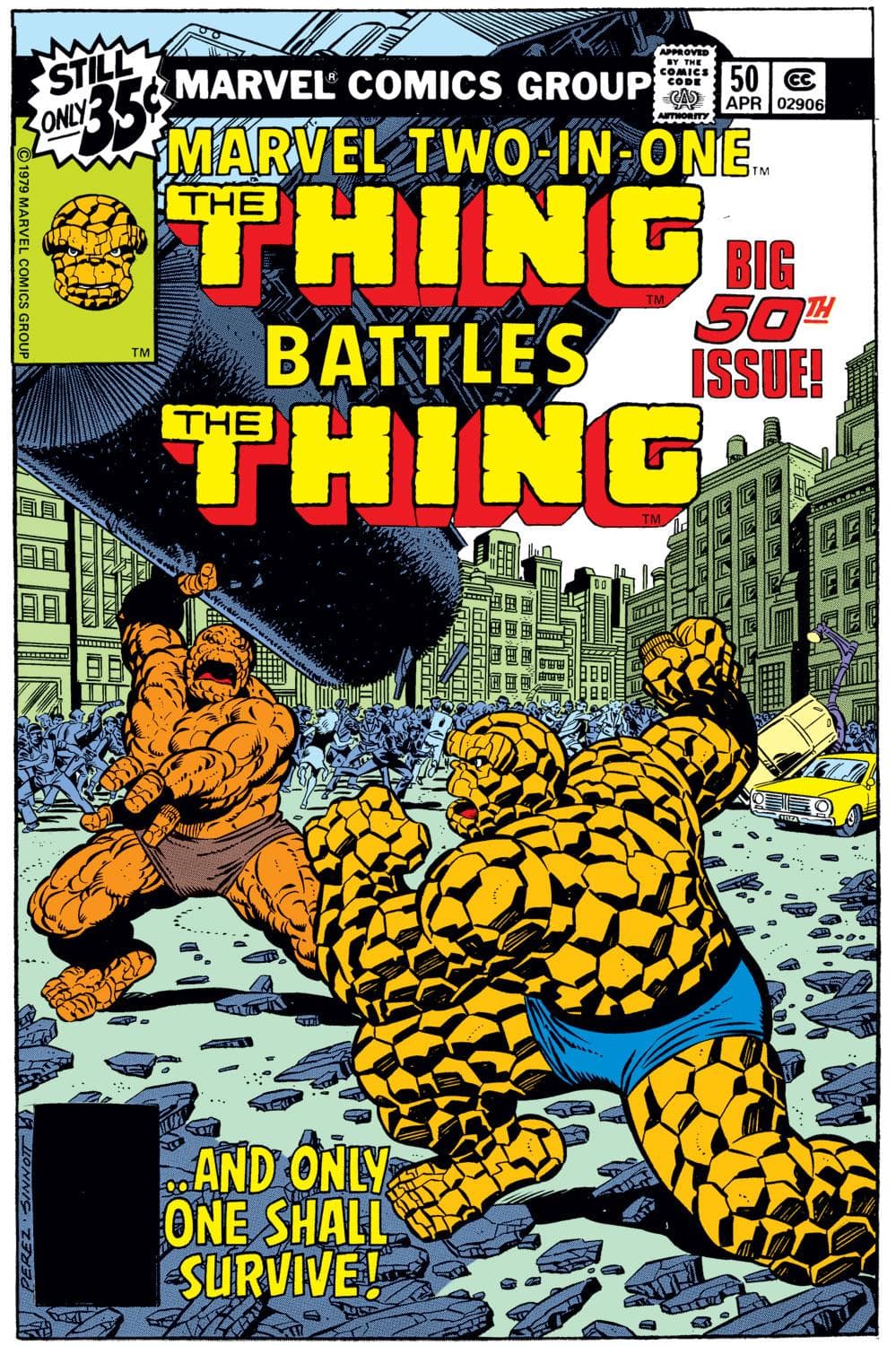 One could say that Ben Grimm's been fighting against himself for as long as he's been the Thing. Outside of his difficulties with his sense of self, this battle literally happened in 1979's MARVEL TWO-IN-ONE #50 when he traveled back in time to cure his old self with a formula Reed created in the then-present.

Old Thing did not react kindly to New Thing showing up and immediately began throwing punches and barbs. Eventually, New Thing got in on the spirit and broke into full-on, building-bashing fisticuffs. After winning, the older Ben dosed his younger counterpart with the formula which seemed to work. However, when he got back to his own time, Ben found out from Reed that instead of changing his past, he created an alternate reality! 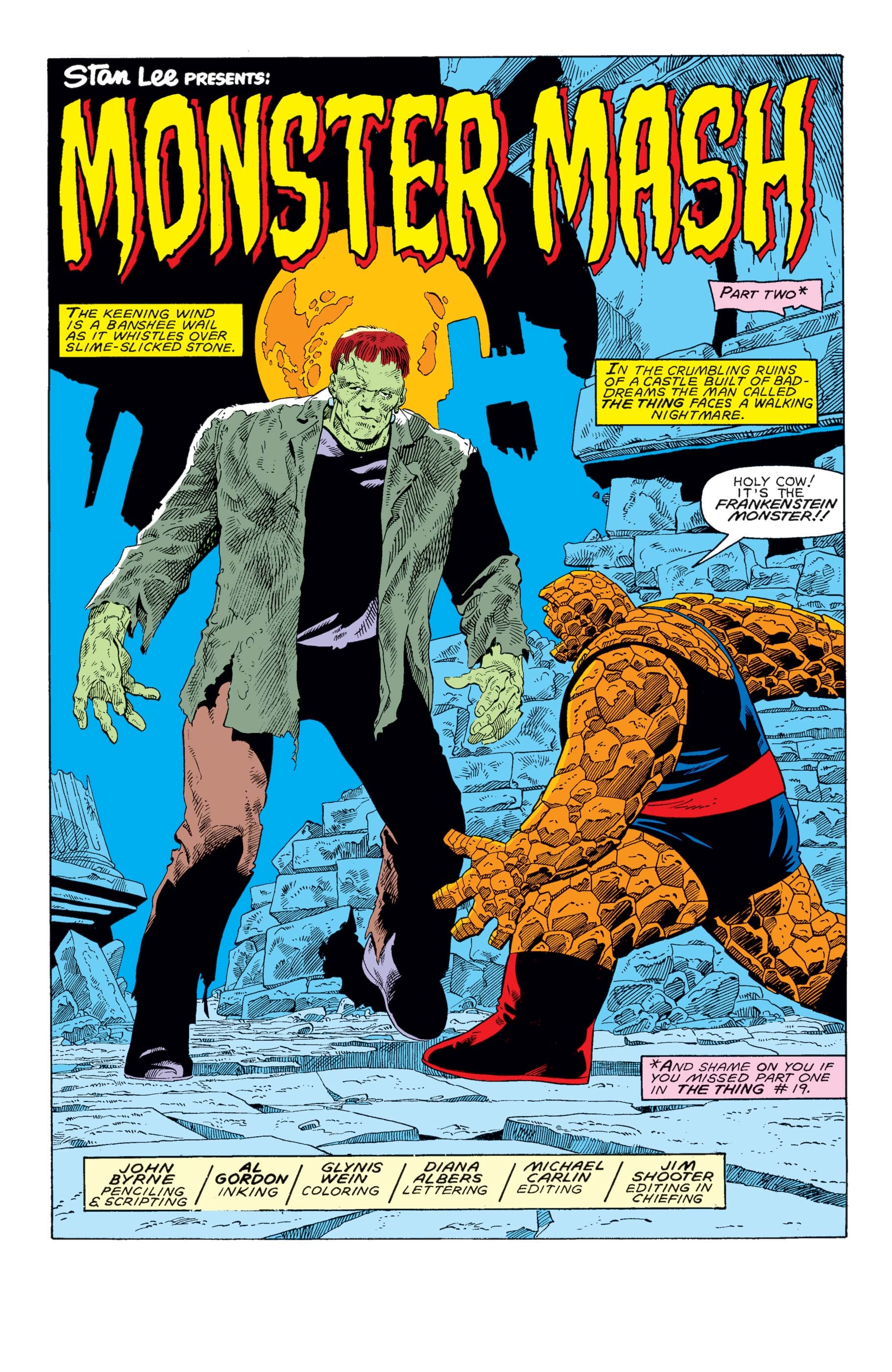 In the wake of the original SECRET WARS, Ben Grimm decided to stay on the Beyonder's patchwork Battleworld because he could transform back and forth between human and rock forms. The planet seemed to respond to Ben's inner most thoughts and fears as we saw in THE THING #19 and FANTASTIC FOUR #274 wherein our hero faced off against classic monsters ranging from a demonic vampire and a mummy with laser eyes to Frankenstein's creation and a werewolf–all controlled by Dr. Julius Akerman, the Monster Master! 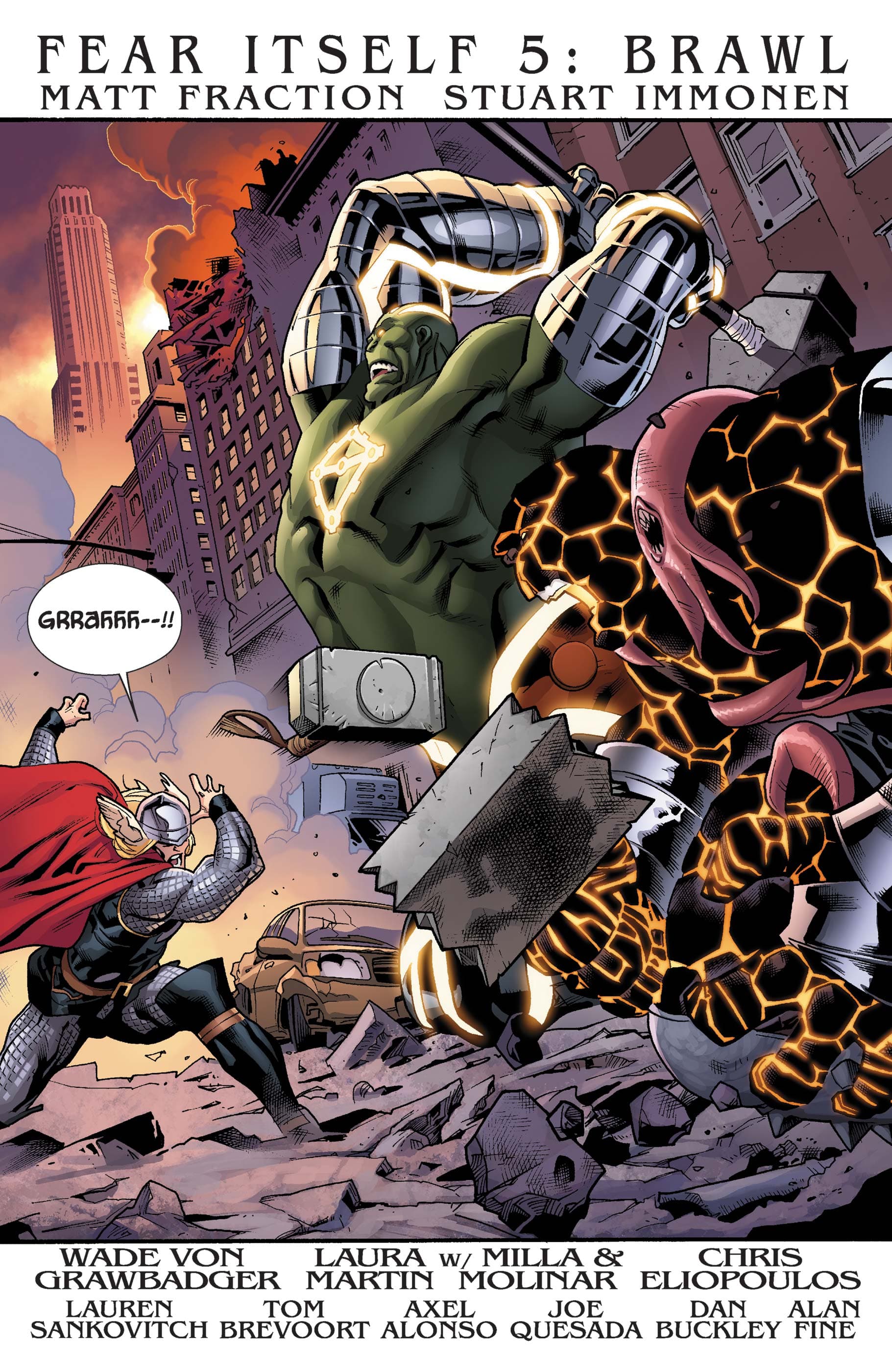 The FEAR ITSELF event featured a variety of evil mystic objects landing on Earth and possessing those who came upon them. During that story, Grimm became Angrir: Breaker of Souls! He fought his own teammates in the FEAR ITSELF: FF one-shot before teaming up with Hulk, now going by Nul, Breaker of Worlds, to fight the uncorrupted Thor in FEAR ITSELF #4-#5, one of the most Earth-shaking fights ever.

Nearly at his end, Thor had to call on Mjolnir to stop Thing-Angrir by flying through his chest! Luckily for fans of Mrs. Grimm's number one son, Franklin Richards came along and saved him! 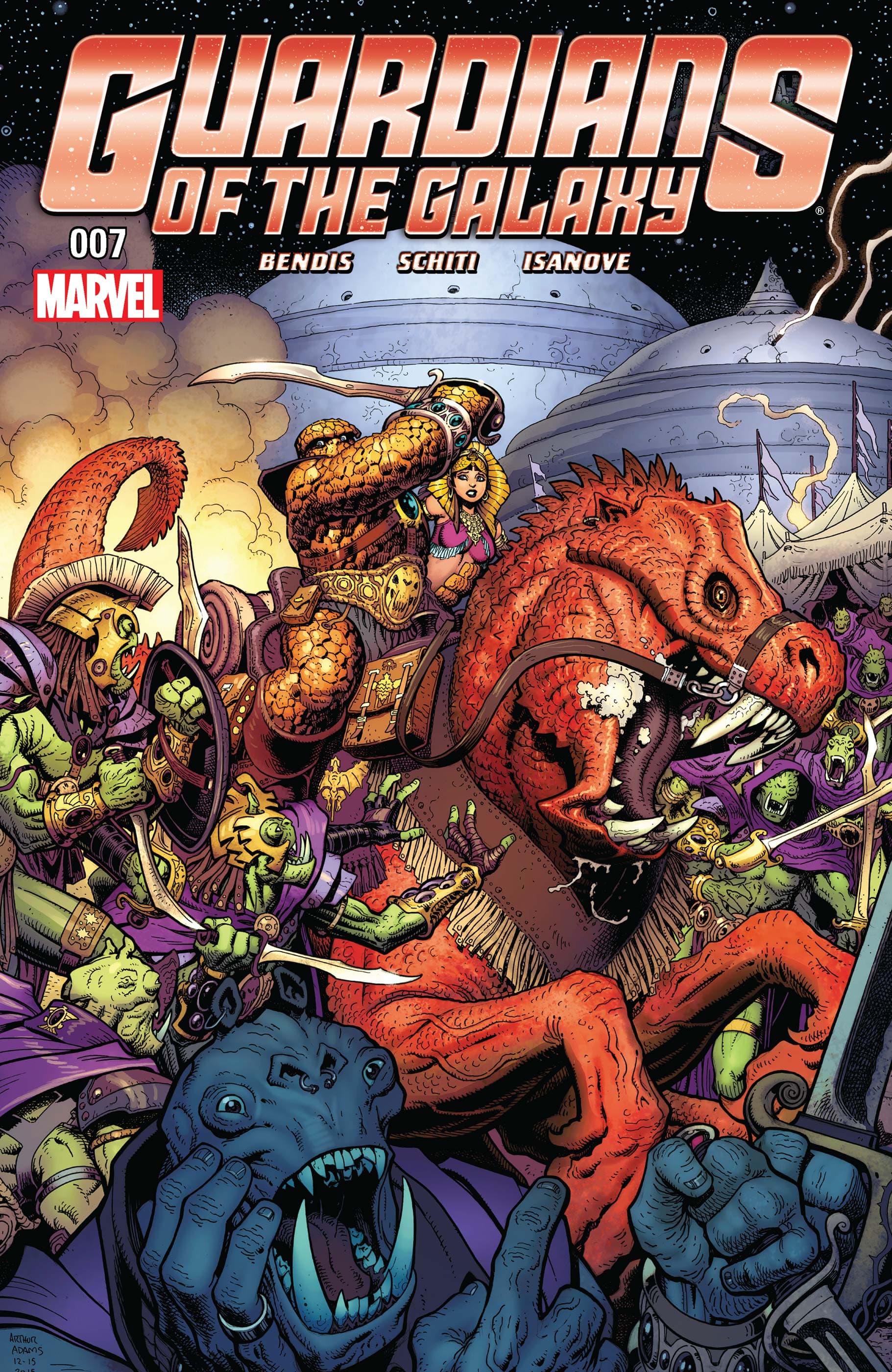 When Reed, Sue, the kids, and the other members of the Future Foundation went off to explore and document new realities after SECRET WARS, Ben decided to return to space and joined the Guardians of the Galaxy. After defeating Hala the Kree Accuser, the team planned to take out the Brotherhood of the Badoon. Rocket allowed himself to get arrested and taken to one of their planets in issue #7. Grimm revealed his presence by dropping in from orbit and clashing with a huge bruiser of a Badoon before taking on a small army of them while Rocket fixed a ship they used to escape with all the freed slaves. The Guardians all then came together again to squash the evil aliens in issue #10. 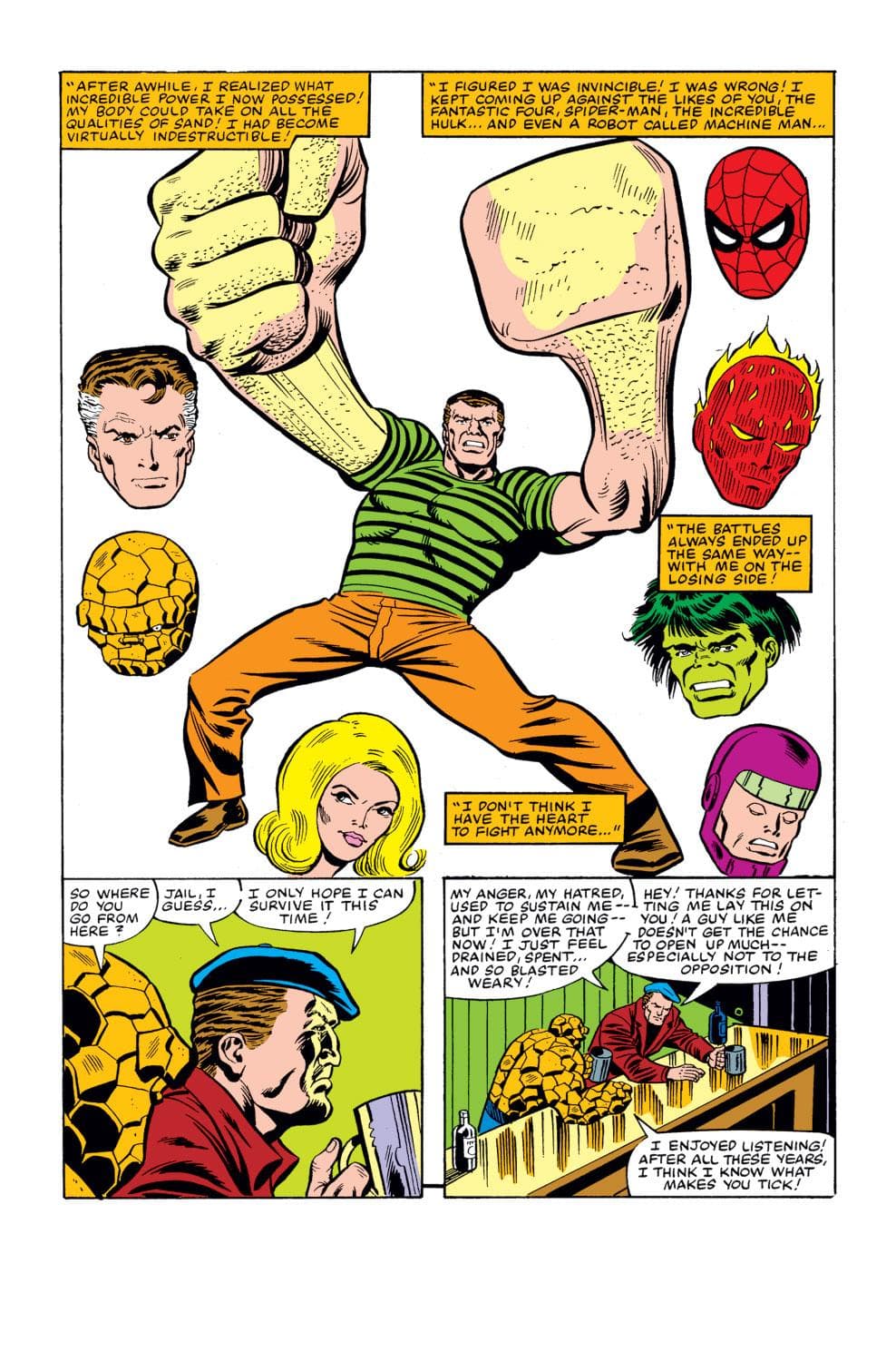 Sometimes, you've got to know when not to clobber a familiar foe. That's exactly what Ben Grimm did in the pages of MARVEL TWO-IN-ONE #86 by Tom DeFalco and Ron Wilson.

Sandman, otherwise known as Flint Marko, had just gotten himself back together and wandered into a bar. Recognizing the villain, the owner called the FF and got in touch with the Thing. He rolled in ready to fight, but when he saw the lack of fight in his potential foe's eyes, Ben calmed down and bellied up to the bar right next to the former member of the Frightful Four. After listening to Flint's story, Ben put some cash on the bar and told him to let Sandman stay dead and turn over a new leaf.

Stay tuned for more from Fantastic Four: World's Greatest Week on Marvel.com! Then prepare to read FANTASTIC FOUR #6 next week!