The Howlers venture behind enemy lines to destroy a Nazi war machine!

They say that there’s no rest for the weary. That sentiment proved doubly true for the Howling Commandos during World War II. Jack Kirby and Stan Lee certainly didn’t take it easy on the stars of SGT. FURY #2 when they kicked the issue off by sending the unit into France for a special mission to destroy the local Nazi sub base. Proving once again why they’re one of the best fighting forces in history, the Howlers caused all sorts of damage to the local Nazi occupiers before making their getaway on a waiting P-T boat. They fully succeeded in their mission to distract the Nazis while an unmanned ship packed with a ton of explosives rammed into the submarine pens.

Thinking they’d return to base in England and catch some rest, the squad quickly realized that they’d have to summon up a second wind and headed out on another mission. This one focused on sneaking behind enemy lines where German scientists worked on building their own atom bomb. Though they didn’t have the full details on the nuclear capabilities of this Manhattan Project-like operation, Fury and his cohorts shifted right back into battle mode. First, they dressed as German seamen, which eventually drew the attention of a harbor patrol, whom they easily overtook. Once in possession of a slightly damaged E-Boat and official uniforms, they made their way into a base, but couldn’t keep quiet for long and started blasting away at the enemy. Not everyone made it out as the Nazis grabbed Dum Dum Dugan. 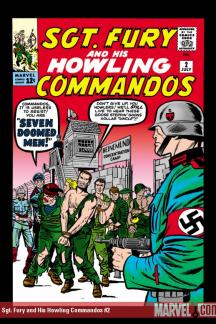 Not willing to let their comrade stay locked up, the Commandos quickly sprung him from jail and then realized that the quickest way to get to the secret weapons lab was to surrender and get sent to the concentration camp at Heinemund. Sickened by what they saw inside the camp, the Howlers moved on with their mission, blowing up huge portions of the vile den along the way. They also freed plenty of captives who fought for their own freedom. The crew then rode off to the weapons lab where they made short work of the scientific equipment and emptied out the train cars of heavy water they needed to create the weapon. While there, Duggan decided to drive a fuel truck right into a rocket they had developed!

With their mission accomplished, Sgt. Fury and the Howling Commandos made their way to the coast, found an underground-provided life raft and rowed away to safety as the weapons lab exploded behind them!