Kirby 100: A Blind Man Shall Lead Them

Daredevil teams up with the Fantastic Four to take on Doctor Doom!

When Stan Lee and Jack Kirby introduced the Fantastic Four in their 1961 debut issue, none of the characters exactly wanted their cosmic ray-granted abilities. Sure—Mr. Fantastic, The Invisible Girl, The Human Torch, and The Thing eventually used their powers to save the world, but they likely would’ve chosen to give them up in the early days.

So what happened when they actually lost their powers just a few years later in 1965’s FANTASTIC FOUR #39 and #40? In the previous story, the team barely escaped a nuclear blast set off by the Frightful Four—and after floating in the ocean for 24 hours, a Navy submarine picked them up so they could convalesce aboard the vessel. Soon, however, they admitted to themselves and each other that in the chaos, they’d lost their powers! 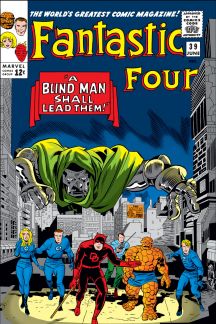 After returning to New York, Reed immediately got to work, attempting to scientifically replicate their powers—while hoping that their enemies wouldn’t find out about their defenselessness. Despite his efforts, Richards failed with his experiments.

As the evil Doctor Doom raged against his longtime opponents—and planned an urgent attack—the Fantastic Four’s lawyer, Matt Murdock, agreed to meet them at a mysterious warehouse. There, he witnessed (via his special sensory abilities) the group practicing with their new power-replicating equipment. Then, during the meeting, Doom began his assault. In the smoke and confusion, Murdock changed into his fighting togs and offered his services as Daredevil!

As Doctor Doom set up in the Baxter Building, using Richards’ own weapons against the heroes, the group split up to take on the villain from different angles. And as Doom obsessed over tracking down the Four, the Man Without Fear snuck in a window and got the drop on the Latverian. 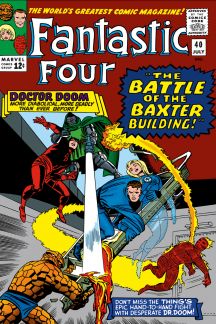 Daredevil held his own against Victor von Doom for a long enough time that the Fantastic Four were able to catch up—though still without powers, they still threw themselves into battle. While his teammates distracted Doom, Richards grabbed the Stimulator—a weapon they used against the Skrulls in FANTASTIC FOUR #37—and zapped Ben, Johnny, Sue, and himself.

The device reawakened their powers, allowing the team to join the fight full-force. The battle between Ben Grimm and Victor von Doom threatened to knock down the entire Baxter Building—if not New York City itself—and ultimately The Thing crushed Doom’s plans for conquest. Though the villain still managed to escape thanks to his diplomatic immunity as ruler of Latveria!

Having regained their powers, the team—and especially Grimm—didn’t celebrate, but at least knew they could defend themselves the next time their enemies came calling.