The Golden Age heroes of Marvel unite under the King’s pencil!

This week’s MARVEL LEGACY #1 quite literally went all the way back to the beginning of the Marvel Universe by showcasing an ancient version of the Avengers, but it also utilized a storytelling format that nods back to the roots of Marvel as a publisher: the anthology! Comics with multiple stories stood as the standard for quite a while during the Golden Age.

Take the 1941 book ALL-WINNERS COMICS for instance. You could have walked into the local purveyor of funny books, dropped a dime on the counter and walked away with five stories all within two covers. Better yet? Those stories featured creative legends like Stan Lee, Jack Kirby, Joe Simon, Carl Burgos, Bill Everett, and more!

Though the book would eventually give birth to a team of the same name—the All-Winners Squad—the earlier issues brought them together on the covers and then showcased the characters individually inside. Still, seeing the likes of Captain America, Sub-Mariner, Human Torch, Bucky, The Angel, and Black Marvel on the front would have been a huge draw.

For their part, Simon and Kirby focused on Captain America and Bucky in their contributions to the first two issues of the quarterly series. In #1, the duo created a story called “Captain America and the Case Of The Hollow Men,” which pulled out all the stops and started with an image of Cap leaping to fight a giant zombie attacking soldiers. We then jumped back in time to show a hooded figure commanding another zombie to attack a police officer. After succeeding at the nefarious task, the leader radioed Adolph Hitler and told him his undead could be hired out for jobs at a million bucks a pop! The Furher agreed and commanded him to take out some British ships. 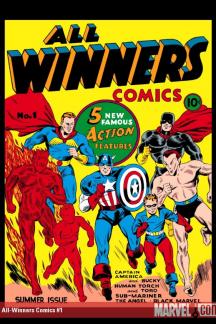 Luckily for our allies across the pond, Steve Rogers and Bucky Barnes had lookout duty by the docks back in the Bowery. They used their guns to try and stop a small army of torch-bearing zombies to no avail. As the mindless monsters boarded the ships, our heroes changed into their fighting togs and got down to business, but still couldn’t stop the fire from taking care of the boat.

Eventually, the shield-slinger realized that whoever created the zombies must have been recruiting them from the Bowery. He and Bucky went undercover and soon found themselves on the way to the villain’s lair. The merchant of death then showed off his macabre work and explained that he drained people of their blood, and then injected them with a chemical that would make them impervious for 24 hours. With all the information they needed, the two true patriots knocked the zombie maker around, destroying the equipment in the process and then crank called Hitler to show him what for!