Marvel at the majesty of Kirby-drawn monsters!

Plenty of fans rightly associate Jack Kirby’s name with costumed individuals punching each other so hard that the very air around them crackles with energy, but he also worked in a variety of other genres. Like many artists in the 50s and 60s, he contributed to anthology comics that featured huge monsters, menacing aliens, and other threats previously unknown to mortal man!

One of those books, AMAZING ADVENTURES, ran for just six issues in 1961 but nicely showcased the abilities of Kirby and Stan Lee to create thrilling stories in just a few pages. The first tale of the inaugural issue followed a man named Paul Ramsay on trial for the murder of his friend. He refused to defend himself because of Torr, an alien who landed and intended to turn Earth into a colony for his home planet.

Using his immense mental powers, Torr switched bodies with Paul’s scientist colleague in an effort to get a lay of the land. Along the way, he used hypnosis-induction to make people see all kinds of crazy things including a car monster! To save humanity from enslavement, Ramsay shot his friend, but knew the court would never believe the story. Luckily for him, a surprise witness led to an immediate mistrial. 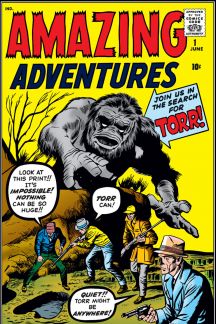 After a story by another legendary comic artist, Steve Ditko, Lee and Kirby worked together to introduce Dr. Droom, a kind of mystic super hero who would go on to appear in all six issues of AMAZING ADVENTURES. Droom answered the call of a Tibetan Lama requesting a doctor. Upon arrival, he had to forsake his medical bag, cross hot coals, and face a half-gorilla, half-lion creature before meeting the Lama who passed his powers along to the newcomer. In many ways, Droom would pave the way not just for fellow occult hero Doctor Strange, but also lay down a version of his origins which revolved around traveling to a temple in the mountains to gain mystical abilities.

Other Kirby-drawn installments of AMAZING ADVENTURES feature a teenager searching town to find an escaped alien named Manoo, a college couple wandering into a monster-filled place known as the Twilight World, and other harrowing tales showcasing the King’s great skill at rendering everything from looming monsters and alien technology to simple, yet powerful looks of fear and rage.