Kirby 100: Among Us Stalk…The Sentinels

In his X-Men exit, the King creates some of the mutants’ greatest foes!

When the X-Men debuted back in 1963, they had Jack Kirby and Stan Lee dreaming up their adventures. Before long, “The King” shifted to working on covers and doing layouts for the book and eventually left. However, before he got going, he helped create one of mutantkind’s most feared enemies: the Sentinels. The arc that introduced the malevolent machines — which ran from 1965 into 1966 and UNCANNY X-MEN #14-17 — saw Kirby working his layout magic along with writer Stan Lee and finisher Werner Roth using his “Jay Gavin” alias. 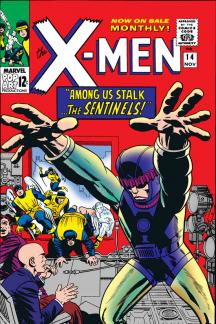 The story began with the X-Men all healing up from their run-in with the unstoppable Juggernaut in the previous issue. As Professor X surprised his recuperating students with the idea of a well-earned vacation, Dr. Trask held a press conference to tell the world how he planned on tackling the “mutant menace.” As his charges left for their various getaway spots, Xavier read the paper, which stoked the fire of fear in its human readers in regards to the potential threat of a mutant uprising. In an attempt to calm the public, Professor X appeared on a talk show with Trask to try and convince the world that mutants posed no more danger than average people. 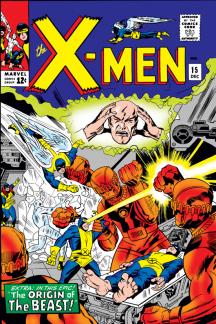 For his part, Trask used this platform to unveil his mutant-hunting Sentinels to the world. The not-so-good doctor wrongfully assumed that the robotic brains he built would always follow him, but that idea fell apart when one of his creations attacked him on live television. In response, Professor X sent out a call for his X-Men to meet him and fight the mechanical menace. Before Iceman and Beast showed up, though, the lead bot sent Trask off so they could learn how to make more Sentinels in order to take over and then protect humanity. 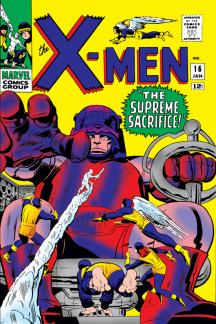 Thanks to a mysteriously malfunctioning automaton, the X-Men figured out where the other Sentinels took Trask, to something called Master Mold. They quickly followed and found themselves facing some incredible defenses. In the assault, Beast and Iceman got captured. As the others tried to figure out how to save their friends and stop the robots, Master Mold ordered Trask to use the Psycho-Probe to reveal Beast’s origins. At the same time, the other X-Men broke into the facility and freed Iceman, but found themselves captured. Things looked especially grim, especially after Trask agreed to make an army of Sentinels in a deal that would keep Master Mold from disintegrating an entire city.

On the outside, Xavier realized that a giant gem near the TV studio helped put the earlier Sentinel out of commission, so he had that flown to Master Mold’s compound. That maneuver coincided with the X-Men breaking out of their prison and attacking their captors. All that, combined with Trask deciding to lash out against Master Mold lead to the destruction of the facility and an apparent end to the Sentinel threat, but only for a moment. 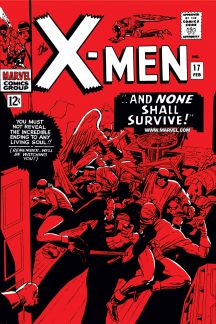 In Kirby’s last issue as layout artist—#17—he saw the X-Men healing from yet another battle, though Iceman remained unconscious. While he lay in a hospital bed, a mysterious force made trouble at the X-Mansion while Warren Worthington III tried beating his visiting parents there. The unseen menace proved none other than Magneto, who opened the door for the Worthingtons at the mansion! Leave it to Kirby to not only go out with a bang, but also present a killer cliffhanger to be followed up by the next artist on deck!

Stay tuned to Marvel.com for more on Jack Kirby and join the conversation on all of our social channels with the hashtag #Kirby100