Kirby 100: At the Mercy of Baron Strucker

Jack helps to introduce another of Marvel’s most vile villains!

Jack Kirby maybe be best known as a super hero artist, but he loved making war comics. A military man himself, “The King” put his crown aside to serve his country during World War II as an Infrantryman and put plenty of those experiences into books like SGT. FURY AND HIS HOWLING COMMANDOS with his collaborator Stan Lee.

Though still thrilling adventure stories, these issues feature some of the hard truths that came with war, like losing members of your squad as the Howlers did when Junior Junipe got injured in issue #4. They carried that sadness and anger with them into the next mission, which introduced them and the readers to a new Nazi threat: Baron Strucker! The villain debuted dueling with another man and easily winning before receiving his latest orders from Hitler: kill Nick Fury. Thinking his prey beneath him, Strucker thought of the mission as nothing more than a game.

The Wing Commander of the Fuehrer’s Death-Head Squadron flew his plane over the Allies’ post, blasting away at Dum Dum Duggan and Izzy Cohen before throwing a tube with a note down challenging Fury to a death duel on Norsehaven in the English Channel. Enraged at Strucker’s taunts, the sergeant requested transport to the Channel from Captain Sawyer, who flatly refused. After dining with his girlfriend Lady Pamely Hawley, Fury called in a few favors and snuck his way to the meeting with Strucker. 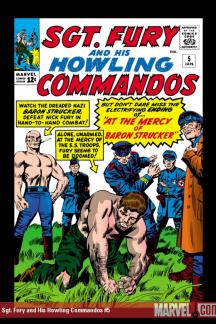 Neither man wasted any time getting into the spirit of the duel itself, which they fought with plywood swords as part of Strucker’s beloved tradition dictated. However, the villain also drugged Fury’s pre-fencing drink and had his lackeys ready to literally trip Nick up. The future S.H.I.E.L.D. chief did his best to fight, but inevitably collapsed. With his opponent down, the Baron called out his photographers and videographers to record the Amerikaner’s defeat. They strapped Fury in a parachute and dropped him out of a plane near the base he had been stationed at.

Upon returning, Captain Sawyer busted Fury down to a private and dismissed him. Still a part of the Howling Commandos, Nick joined his crew as they went out for another big push. The Howlers got the drop on a tank squadron, stole their vehicle and used it to destroy a rocket base before busting into an enemy base that happened to house Strucker!

The nefarious Nazi didn’t stand a chance in a fair fight with the furious Fury who knocked him unconscious after punching him through a wall! Upon returning, Sawyer saw the error of his ways in demoting Nick—mostly because a general said how lucky he was to work with the Howlers boss—and returned him to the rank of sergeant!