Captain America stands in the way of a massive jailbreak!

Upon thawing out in the modern era, Captain America found himself duped a few times by people who took advantage of his optimistic nature. In TALES OF SUSPENSE #62, Stan Lee and Jack Kirby set our hero up to give a demonstration of breakout prevention maneuvers in 1965. However, instead of performing his fantastic physical feats for the warden, the Sentinel of Liberty unwittingly did so for an escaped con named Deacon who led an outbreak!

Deacon ordered the prisoners to jump Captain America, overpower him, and throw him into a cell with acting Superintendent Carlson. While both behind bars, Carlson explained that Deacon sparked the revolt, but they had no way of actually getting beyond the main gate. Having swiped Cap’s mighty shield, the criminal and company figured they could use the marvelous weapon to open up the door to the prison, but found themselves stymied. See, the mastermind knew that Iron Man had built magnetic capabilities in the shield and that the gate worked with magnetism, but could not figure out how. 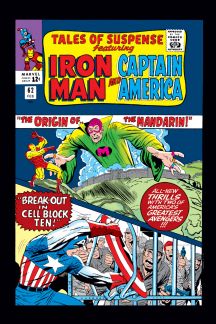 And he didn’t have enough time, either, as an escaped Star-Spangled Avenger leapt into battle, taking on an army of armed prisoners desperate for a way out. Deacon tried making a break for it with Cap’s weapon in hand, though that also proved short lived as our hero slung a gun to trip the villain up so he could regain his rightful property. Before tossing his shield at the assembled bad guys, Steve Rogers revealed that they’d been wrong from the get-go! Though Iron Man had built magnetic implements for both the shield and Cap’s glove, he ditched the add-ons because “They ruined my shield’s delicate balance!”

Even without his famous weapon, Cap handled himself perfectly. A thug named Thumper tried socking him, but Rogers met that attempted blow with his own fist, illicitng a “Boang!” sound from the concussion. With the main action over—at least on his end—Captain America handily dispatched with the rest of the criminals and took a sneaking Deacon out by literally backing into him. From there, the guards burst in to regain control of the punch-drunk would-be breakout artists. Carlson then revealed that the main gate would not have opened because of magnets, but instead with a kind of magic phrase: “Captain America”!