Join us this month to celebrate Jack ” King” Kirby’s 100th birthday by learning about the characters and stories he created to change comics forever. To commemorate Jack’s centennial, we’ve sat down with the modern-day creators he influenced—and the decades of work he gifted us all.

Jack Kirby co-created some of the most iconic characters in the Marvel Universe. In addition to Captain America back in the 1940s, he also helped bring Iron Man, Thor, The Avengers, Nick Fury, Hulk and the X-Men to four color life. Even before that, he worked on books like JOURNEY INTO MYSTERY and STRANGE TALES bringing weird, wild monsters into readers’ homes every month.

Cullen Bunn continues that tradition as the writer of many X-Men books–including X-MEN BLUE right now–and both the MONSTERS UNLEASHED limited series and the current ongoing which showcase many of those massive miscreants, while painting them in a new light.

We talk with Bunn about playing in Kirby’s sandbox with everything from the coolest monsters to the mightiest mutants!

Marvel.com: Do you remember when you first experienced Jack Kirby’s work?

Cullen Bunn: I couldn’t tell you a specific book that was my first Kirby experience, but I vividly remember sitting at the breakfast table in my Aunt Mary’s house in South Carolina, reading a stack of comics, many of which were clearly Jack Kirby stories. Even before I knew Kirby by name, I recognized his style, and I loved it.

Marvel.com: Were there certain lessons you learned about how comics work either visually or verbally from looking at his stories?

Cullen Bunn: The lesson I think I learned from Kirby could be boiled down to “go big or go home.” His stories are dynamic and bold and exciting. More than anything, Kirby was an “imaginer” and I don’t ever want to forget how important that is to comics. He brought his all to every page he worked on.

Marvel.com: Jack drew the first 10 issues of X-MEN. Did you look back to those earliest appearances before jumping into that pool yourself?

Cullen Bunn: Of course! I poured over those original stories again and again, and I even went so far as to read them in their original comic form–I’m a big X-Men collector–instead of in trade, just to enhance that old school feel.

Marvel.com: You got even further into pure Kirby with MONSTERS UNLEASHED. How did the idea to revive all of those great monsters come about?

Cullen Bunn: MONSTERS UNLEASHED was always intended to be a love letter to the classic Marvel Monsters and their creators. The trick, of course, was to figure out a way to bring them all together. Kid Kaiju, the boy with the power to summon monsters by drawing them, is a tribute to artists like Don Heck and [Steve] Ditko and, of course, Kirby, who brought them to life. He’s an ode to the childlike wonder Kirby brought to the page.

Marvel.com: When you started working on MONSTERS UNLEASHED, did you immediately start re-reading those comics?

Cullen Bunn: I did! I have a collection of old Marvel monster comics, and I broke them out and read those original tales. That’s a great perk of the job. For research, I can spend some time reading terrific old Kirby comics.

Marvel.com: Were there any monsters you weren’t familiar with that really surprised you in those issues?

Cullen Bunn: I think I had seen most of the monsters at some point over the years. Some of them I had encountered in other comics, drawn by other creators, though. Digging into the research, I was amazed by just how many of these creatures Kirby actually created. The list was pretty impressive. Some that were most interesting or with whom I wasn’t super familiar were Spragg, who is just an evil hill, and Trull, who was a killer steam shovel. 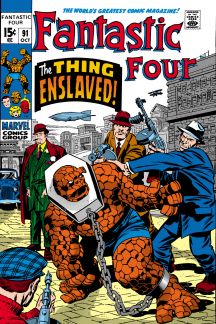 Marvel.com: You’ve mentioned being a fan of FANTASTIC FOUR #91–93. In that storyline, Stan and Jack worked with Skrulls and other aliens, 1930s-esque gangsters and a giant robot monster in Torgo. Those issues are packed with cool visuals, but also some great Kirby face-acting as Thing struggles with all of it. Did that come into play when you were first discovering that tale?

Cullen Bunn: Yeah, for sure. This was another issue I just picked up off the rack at the grocery store, and it struck me to the point that I remember the very moment I first looked at the issue. There’s a splash page with the Thing sort of turning and brooding sadly toward the “camera” while Torgo stands behind him stoically. It’s a quiet image, but there’s so much emotion and drama on the page, it’s the one that I connect with in that arc.

Marvel.com: We’ll be speaking again soon about your love of DEVIL DINOSAUR, but in a lot of ways those original 1970s Marvel stories are pure, unadulterated Kirby. When you first read them, did that come across?

Cullen Bunn: Oh, yes! These days, I often go into the comic shop and ask to be pointed in the direction of a book full of “mayhem.” What I’m really asking for, I think, are books like Kirby used to create, with wild ideas and crazy events jumping from every panel. I’m always trying to recapture that wonderful feeling of reading those Kirby classics.

In this article: Jack Kirby