Kirby 100: Daredevil in the Savage Land

Jack lends a hand and some layouts to a newcomer named John Romita!

For its first year, DAREDEVIL featured a true who’s who of comic book art talent working off of writer Stan Lee’s scripts. Bill Everett launched the series with Joe Orlando, Wally Wood, and Bob Powell following. Then in issue #12, everything changed. That’s the first time an artist by the name of John Romita drew ol’ Horn Head, but he didn’t tackle the Man Without Fear alone. He had help in the form of layouts from none other than Jack Kirby!

“The King” had provided a number of covers for the book, but only worked on interiors for #12 and #13. In those issues, Lee and Kirby introduced Matt Murdock to a character they debuted over in the pages of UNCANNY X-MEN #10, Ka-Zar!

The blind lawyer from Hell’s Kitchen needed some time away from Karen Page and Foggy Nelson, so he booked a cruise, but lost track of time and needed to zip across town as Daredevil to catch the ship! Once on board, Matt heard a fellow passenger ask about a pirate called The Plunderer who, as you probably guessed, attacked the vessel not long after. Daredevil sprang into action, but ultimately got captured by the villain whose operation proved far more sophisticated than expected.

Meanwhile, Ka-Zar found himself a bit bored and lonely in the Savage Land after enjoying the X-Men’s recent visit. However, a group of Swamp Men sailing downriver towards Skull Island quickly garnered his attention. As it happened, Plunderer intended to visit Skull Island as well, which brought all of our players onto the same stage. A battle quickly broke out as Ka-Zar attacked the interlopers. Though they fought, the lord of the Savage Land decided to save the unconscious man in red because he struggled so valiantly. 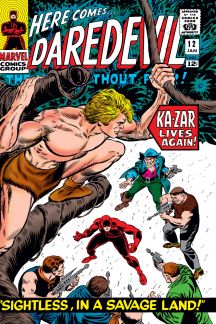 Ka-Zar searched for aid for Daredevil while the latter rested in a cave. However, his recuperation process came to a quick halt when an Ape Man attacked. Around that same time, The Plunderer and his crew found DD, and Ka-Zar returned. With everyone together, Plunderer revealed a shocking truth: he and Ka-Zar both had pieces of a medallion which marked them as brothers! With Ka-Zar distracted, Plunderer’s men captured him. Later, the pirate told Daredevil that their dad, Lord Plunder, discovered Vibranium and built a huge vault out of the metal that could only be opened by the combined medallions.

Plunderer then dropped DD down into Ka-Zar’s cell and tried pitting the two fighters against each other once again. They didn’t fall for it and soon broke out, carrying on into the next issue, which Romita handled on his own. Romita would go on to draw several more issues of DAREDEVIL before moving over to another little title called AMAZING SPIDER-MAN. His Man Without Fear replacement proved another legend-in-the-making: Gene Colan!