The King and Joe Simon intro Marvel Boy and other Golden Age goodies!

Back in the 1940s a pair of scrappy comic-making partners started creating the kinds of books that would change the face of the industry. Joe Simon and Jack Kirby launched a studio that introduced the world to Captain America, but before that, they worked on the last three issues of DARING MYSTERY COMICS for Timely Comics in the early part of the decade. Though not one of the more popular and lauded super hero anthologies from that era, the book did feature some very interesting work from the future “King of Comics” including the covers to installments #6-8 and the introduction of the very first Marvel Boy!

In an interesting mix of mythology, the tale explained that the ancient Egyptians figured out  reincarnation which also applied to Hercules, Son of Power as he died. The Greek demigod’s spirit rested in Valhalla for a time until World War II broke out and he decided to return to the land of mortals. He traveled to Earth, found a newborn baby named Martin Burns, and inhabited his body.

Upon his turning 14, a mysterious stranger appeared in the middle of a nighttime thunderstorm to give the youth a wrapped gift. The mystery man then popped into Martin’s room as a talking shadow and explained that the soul of Hercules resided inside him and that he would have the strength to topple fascism as The Marvel Boy!

The gift held Martin’s new super hero uniform, which he put on before heading out to stop a group of Fifth Columnists from bringing more Axis agents into New York City! With his incredible strength, Marvel Boy easily stopped the car transporting the new spies and also uncovered important information about the whole cell that he turned over to the FBI. 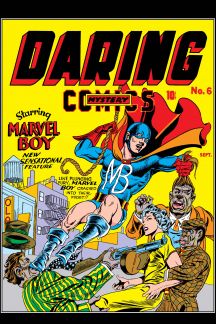 That same issue also saw Simon and Kirby collaborating on a character the former introduced in the first issue of DARING, The Fiery Mask! In this one, Dr. Jack Castle made a house call to a woman going through shock after a member of the Legion of the Damned appeared and gave her a baby who would become the evil group’s champion! Castle returned to the house that night, but as his heroic alter ego Fiery Mask! He arrived just in time to see the baby get up and start walking around before summoning a giant, green assassin. Fiery Mask stopped the creature’s first attempt at murder and then followed the menace through some kind of portal that lead to an epic battle with demons!

In DARING MYSTERY COMICS #7, Simon and Kirby debuted another new character: Captain Daring. Set in a world where evil underworlders developed weapons that allowed them to easily infiltrate the United States and destroy cities, the tale found only one man ready to stand in their way. The Army’s Captain Daring used solar powered underground planes and a good deal of cunning to win the day and save the Earth in the process.

Looking back at these Golden Age Kirby offerings not only shows how his art style evolved over the course of his long career, but also some of the themes that h’’d never stop exploring like kids receiving immense powers, mythology and its relation to heroics, and coming up with really creepy monsters!