Join us this month to celebrate Jack ”King” Kirby’s 100th birthday by learning about the characters and stories he created to change comics forever. To commemorate Jack’s centennial, we’ve sat down with the modern-day creators he influenced—and the decades of work he gifted us all.

DEVIL DINOSAUR may have only lasted nine issues in 1978, but the series continues to inspire creators to this day. Jack Kirby’s return to Marvel saw him unleash his creativity as the writer-artist-editor on a series of books including BLACK PANTHER, CAPTAIN AMERICA, and MACHINE MAN.

While those books dealt with super heroics and science fiction in various ways, DEVIL DINOSAUR took place in the distant past, where a humanoid creature named Moon Boy made friends with a huge red Tyrannosaurus-like dino. Both turned out to be outcasts who banded together to battle threats ranging from other dinosaurs to time-hopping witches!

For MONSTERS UNLEASHED and X-MEN: BLUE writer Cullen Bunn, the first issue of DEVIL DINOSAUR left a huge influence on his storytelling perspective.

“One thing about a Kirby first issue: he doesn’t waste a lot of time,” Bunn explains. “He throws the reader into the action and gets the story moving. That’s a good technique to keep in mind.”

Despite his passion for the work, Bunn didn’t experience DEVIL DINOSAUR for the first time with that initial issue; he instead came to it by way of the larger Marvel Universe! 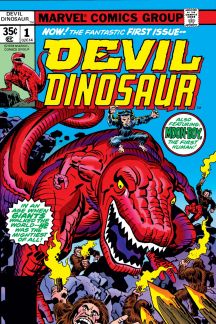 “I found that book at just the right age,” he recalls. “I was reading Marvel’s GODZILLA series, which had a Devil Dinosaur guest appearance [in issues #21-22]. As soon as I read that, I knew I had to find Devil’s main series. I bought my first issue of that book at a drug store.”

Like many of those 1970s Kirby classics, Bunn’s first issue—DEVIL DINOSAUR #3 as it happened—featured some of the biggest and wildest ideas to date: “It was a story where Devil and Moon Boy faced a giant yeti creature who wore a triceratops skull as a helmet,” Bunn laughs. “It was giant monster craziness the way I liked it!”

For all of the amazing imagery and imagination, though, DEVIL DINOSAUR featured the one thing that always kicked Kirby comics to the next level: true emotion.

“The series had a lot of heart, too, showing the friendship between Devil and Moon Boy,” Bunn relays “As the book progressed, it got crazier and crazier, with aliens and cosmic horrors. Again, it was pure giddy imagination on the page. It seemed like Kirby was having a blast with the book. Really, that’s one of the things I love about all his work. It always felt like he was really reveling in the act of creation.”