A heroic spin on a classic alien invasion story courtesy of Kirby!

During the pre-super hero, monster-filled days of the early 60s, Jack Kirby worked with Stan Lee to create an army of aliens and other threats to help fill anthologies like TALES TO ASTONISH, JOURNEY INTO MYSTERY, and TALES OF SUSPENSE. The protagonists of those stories tended to be regular people stumbling into weird situations and, hopefully, coming out on top thanks to good old-fashioned grit and determination.

When the folks in flashy costumes took over, they also began taking on very similar threats in the pages of their own books. However, with 1976’s CAPTAIN AMERICA ANNUAL #3, Kirby brought the two worlds together in a story called “Doom is the Black Star!” The issue kicked off with a farmer named Jim Hendricks blasting a huge purple alien monster away from the Sentinel of Liberty with a sci-fi ray gun.

Once the creature vanished before their eyes, Cap and Jim remembered how the latter contacted the former after he appeared on a local talk show. It took some convincing, but eventually the hero agreed to investigate the strange beings and U.F.O. that landed on Hendricks’ farm.

More surprises came when Hendricks took Cap back to his house where the masked pilot of the ship—dubbed “The Captive”—temporarily resided. After unmasking, The Captive explained that, even though it took him a million years, he found a way to escape from a black hole! Upon doing so, though, agents of the Galactic Empire came to put him back.

Meanwhile, up in space, the ship that sent the initial monster deployed a Combatron to regain their quarry. Fighting like a furious storm, the being unleashed its fury on the two men. Cap attempted to buy time by facing off against the Combatron while Jim searched for alien weapons. Having gained the upper hand, our hero had to leap out of the way of lasers blasting from the ship to erase all evidence of the Combatron and its pod. 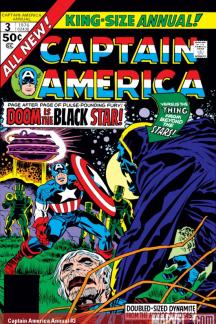 With an army of Magnoids descending towards Earth, the Sentinel of Liberty remained behind to size them up while Jim and Captive returned to the alien’s ship. Once there, Captive’s true colors started showing through as he rambled about being feared and returning to his full power levels.

Back outside, Cap did his best fighting off a legion of mechanical men. He held his own and even made off with one of their weapons, but quickly ran back to the ship where Captive truly revealed himself. Instead of finding Jim arming himself to take on the invaders, Captain America saw his new comrade almost completely drained of life!

The Captive then revealed his origins as part of an invasive, energy vampire race that had been mostly felled by use of synthetic, non-organic life forms like the Magnoids. Cap withstood Captive’s attempts at draining him of his own life force, which gave the Magnoids enough time to get inside the ship. As the villain began powering-up, the Captain summoned the last of his strength, slung his mighty shield, and knocked Captive unconscious!

The robots then wrapped Captive up in an inorganic material, which kept him still during the super-fast trip to a star called Epsilon Four. Once there, the space cops shot the villain into the sun, which went nova moments later, presumably killing the energy vampire in the process.

The issue closed with Captain America telling his story at an official military hearing, but the complete lack of evidence—aside from Jim’s corpse—led to them sweeping the whole thing under the rug. In the end, even in the face of the government’s stance that full, public knowledge of extra terrestrials would fill the average person with terror, Cap saw hope in a future that would be more open to visits from other worlds.