The King lets his imagination and pencil run wild with the Eternals!

During Jack Kirby’s return to Marvel in the 1970s, he had close to free rein when it came to rejuvenating existing characters like Captain America and Black Panther while also developing brand new ones like the Eternals. A race of super-powered individuals who lived a very long time, the Eternals made it their mission to protect humanity from the evils of the Deviants. However, in the pages of ETERNALS #14–16, Ikaris, Sersi, and Makkari found themselves faced with a far different challenge: The Hulk!

However, this particular Jade Giant proved a far different beast than the Green Goliath originally spawned by a gamma bomb. Instead, this one began as a robot created by some college students intending to get the crowd riled up for a football game. When the Uni-Mind—a conglomeration of all the Eternals in a floating collective brain—unleashed its power on the Earth, it unintentionally brought the artificial form to life. Though incredibly powerful in their own right, the trio of Eternals—accompanied by their human friends Margo and Professor Holden—didn’t seem capable of putting a dent in the cosmically powered being. 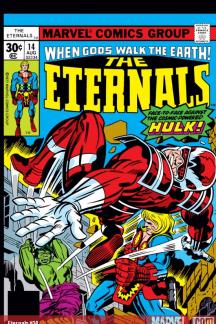 As you can imagine, the police and National Guard forces did not fare any better with the rampaging monstrosity who seemed bent solely on destruction. Just as the powered-up robot made his way to Ikaris for one final bout, the Eternals’ leader Zuras appeared out of nowhere, proclaiming, “Let my hand decide this fight!!” With but a touch, he began to release the cosmic energy from the bionic beast, but that still left Ikaris and company with a powerful robot to track down.

These events rolled right on into even more compelling ones as the pseudo Hulk blew itself up under the city after messing with gas lines. Once underground, Ikaris found himself taken over by another presence that soon made him do battle with his compatriot and friend Makkari—but that’s another story for another day!

The real fun of this arc comes from seeing these new characters take on a classic one that Kirby co-created 15 years prior. From the fisticuffs to the destruction and even the moments when the Eternals deal with the media, these issues comprise pure Kirby at what many consider his best!