Jack Kirby’s impressive battle scenes proved so captivating that he and writer Stan Lee would integrate them into comics even when they didn’t necessarily need to be there! Take CAPTAIN AMERICA #105 for example: it started with a one page splash of Cap, Bucky, and the Army rushing towards a Nazi contingent in the foreground before giving way to a gorgeous two-page spread of all the patriotic heroes smashing through the German line! The comic itself even told us that these images essentially existed because Kirby excelled in that arena. “We’ll admit this doesn’t have much to do with the stirring saga that follows, but we just couldn’t resist giving Jolly Jack a chance to let himself go on this sizzling scene…and we kinda suspect that no True Believer amongst you is gonna complain!”

By the next page we discovered that these snapshots of action existed in a presentation of combat films being shown to Steve Rogers in an effort to get him to narrate the project for TV. Instead of exciting the Avenger, though, these glimpses of his partner in patriotism simply reminded him that Bucky Barnes did not make it out of World War II alive. Rogers walked right out of the meeting without giving an answer to narration job. Instead, he thought about getting himself out of love interest Sharon Carter’s life for fear it would bring danger or even death to her. Instead, he chose to rush right into danger.

At that very moment, Batroc the Leaper met with his new partners in crime Swordsman and Living Laser to steal a Seismo-Bomb from a spy before the U.S. government could get their hands on it. Somebody must have heard Cap’s wishes, because we then cut to him getting a mission briefing about the same weapon. S.H.I.E.L.D. had gotten the man who brought it into the country, but he died before they could find the device itself. 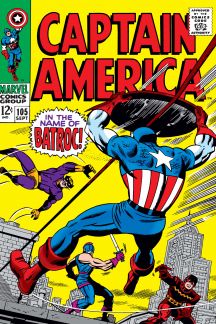 Moments after leaping into action to find the potentially city-destroying explosive, the Shield-Slinger saw the trio of enemies also hunting for the same object. We then got treated to a multi-page Kirby-drawn fight between Cap and Swordsman while the other two continued looking for the Seismo-Bomb. Though the villain’s weapon featured far more tricks and surprises, Cap relied on his fists to take his opponent out! Next, the Avenger went up against the Living Laser and his chaotic energy blasts. Once again, Rogers used his honed skills as a hand-to-hand combatant and master tactician to disable LL’s weapons and get the information he needed to stop Batroc.

All of that led to a thrilling battle between two of the best fighters in the Marvel Universe as Manhattan’s fate stood in the balance. However, when Cap explained the potential devastation—and impending death—that would result from the Seismo-Bomb detonated, Batroc ran off leaving our hero to dismantle the device just in time!

This issue stands as a shining example not only of the battlefield scenes mentioned above, but Kirby’s absolute expertise in presenting action and super fights in a way that’s clear, concise, and packed with danger. In other words: this issue offers plenty of evidence as to why Kirby will always be King!