The war-time hero turns secret agent courtesy of Stan Lee and the King!

Stan Lee and Jack Kirby changed the comic landscape with a quartet of adventurers in 1961. As the decade pushed on, so did they, creating more fantastical super folks than we can count, but in 1963 they introduced the world to a guy who would become one of the most important figures in the Marvel Universe: Nick Fury.

In the midst of the super hero resurgence, Stan and Jack decided to play to both their strengths and launch, of all things, a World War II comic. In a 2005-penned intro to the Marvel Masterworks collection of their run, Lee admitted that he considered these stories some of the best he’d ever written and Jack had ever drawn: 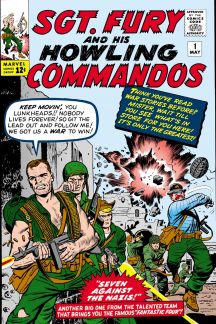 “Maybe I relate to them so much because ‘King’ Kirby and I both served in World War II,” Lee wrote. “Jack was a fightin’ infantryman with the Third Army and I was attached to the Signal Corps. We were both discharged in 1945 after three years of service. And I know I don’t haveta tell you, it’s an experience you never forget.”

SGT. FURY AND HIS HOWLING COMMANDOS not only gave the world tough talking Fury, but also his band of misfits, including Dum Dum Duggan, Gabriel Jones, Dino Manelli, Izzy Cohen, Junior Juniper, and Rebel Ralston. Lee said that he took pride in the diversity of the cast, which accurately reflected their experiences during the war.

Of course, Nick Fury wouldn’t stay in the 40s forever. In FANTASTIC FOUR #21, he made his first appearance in the modern day, meeting up with Reed Richards who had actually appeared as a pre-Mr. Fantastic scientist in SGT. FURY #3. Not yet sporting his now-iconic eye patch, Fury worked on a case for the CIA at the time. In the next two years, Nick lost an eye and became the head of the Supreme Headquarters International Espionage Law Enforcement Division—or more simply S.H.I.E.L.D.—as seen in 1965’s STRANGE TALES #135. 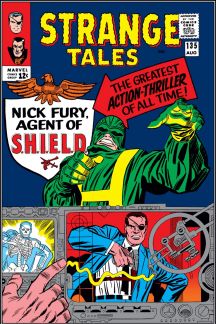 Beyond evolving Fury into Marvel’s number one spy—and also its first and last line of defense against any number of threats—Kirby and Lee also introduced concepts like The Helicarrier, Hydra, Life Model Decoys, Zodiac, the ESP Division, and A.I.M., among many others. Just try and think of a long-running Marvel comic that hasn’t featured one of those elements—it’s no small task!