Kirby 100: Object from the Sky

Devil Dinosaur allows the King to show off all his unique skills!

When it came to artistic strengths, Jack Kirby had enough to fill a book—several in fact! Just off the top of the head, he excelled at monsters, aliens, heroes, villains, reaction shots, architecture, vehicles, fists, and, of course, krackle! If you want to see all of that in one place, feast your eyes on DEVIL DINOSAUR #4–6 from 1978!

In that three-issue arc—which Kirby wrote, drew and edited—the title beast and his pal Moon Boy investigated an awesome, huge-mouthed monster! According to the caveboy, his people foretold that this creature would not only eat the moon, but also act as just the first of many such devourers. The following two-page spread not only showed the true power of the invader, but also a great deal of the King’s aforementioned attributes!

Even though that initial scene proved just a dream, Moon Boy still stood wary of impending attacks, which came moments later as a space ship landed nearby. Upon revealing themselves with a blast of fire aimed at our heroes, the aliens then shared their mission to cleanse the area of all lifeforms! While they failed to kill Moon Boy and Devil Dinosaur, they did succeed in capturing the former and taking him back to their ship for vivisection! Meanwhile, understanding the shared threat to their world a pair of Hill Folk called White-Hairs and Stone-Hand ally themselves with Devil to send the aliens packing.

After witnessing dinosaurs loading into the ship for chemical processing and Hill Folk disintegrated for rebelling, the unorthodox trio journeyed to The Tower of Death to save their way of life. It didn’t take long for the armored aliens to give chase and, even though the Hill Folk questioned Devil’s path, he soon proved adept at using the environment against their pursuers. 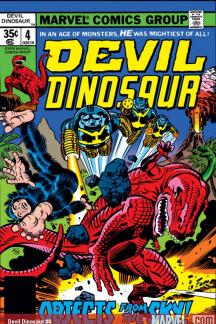 As DD and the Hill Folk witnessed the denizens of The Tower Of Death—giant ants called Swarmers—obliterate one of the aliens, the invader’s brethren continue their unspeakable experiments on Moon Boy in the ship. To retaliate against Devil for killing three of their own, the aliens unleash a weapon of destruction called The Land Crusher. They then used the giant laser to destroy the Tower which sent the Swarmers in all directions. More importantly, it left Devil Dinosaur nearly dead underneath all that rubble.

DD quickly recuperated in time to help White-Hairs and Stone-Hand save a female of their kind called Eev. Eventually, the Swarmers make their way to the ship and destroy it with their sheer, overwhelming numbers. Of course, the adventure for our stars continued on as they had not been reunited by the end of DEVIL DINOSAUR #6 and still needed to deal with the alien leftover called the Demon Tree…but that will be a story for another day!